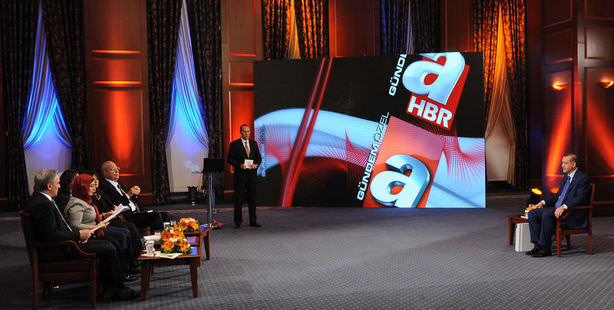 Prime Minister Recep Tayyip Erdoğan took part in a very special interview by correspondents Mehmet Barlas, Sevilay Yükselir, Mustafa Karaalioğlu, İbrahim Karagül and Nihal Bengisu Karaca that was joint broadcast on A Haber and ATV. Commenting for the first time on the 'dershane' prep school debate, Erdoğan stated that this was an issue that surfaced in the 1980's and has become a rising trend that befell their government to handle and therefore they decided to follow a format that allows these prep schools to transition into private schools. Erdoğan also added that the reason he has refrained from commenting on the matter up until now is because he did not want to enter into what he referred to as a 'distasteful polemic.' 'Dershanes' refer to extracurricular prep schools that prepare students for high school and university placement exams. While plans are to shut down these prep schools, the state is offering a series of incentives for 'dershanes' to transition into private schools.

The Prime Minister stated that they will be seeking quality in these new schools with a limit of 30 students per class. If there is a lacking in student numbers the government will also pick up the rear, announced the Prime Minister, explaining that they will either provide additional students or will pay a supplement for unfilled seats, "because we will be putting an end to under-the-counter education. This business which takes place in apartment flats needs to stop." Erdoğan also remarked on prep schools' concerns they have too many teachers, by stating, "If you have too many teachers you can transfer them to us and we will interview them and then employ these teachers in state schools, without subjecting them to a placement test. However, you do not even want that. So, you tell me what it is that you want," said Erdoğan referring to the ongoing debate over the issue and adding, that if it is land, they are ready to allocate prime property all over the country. "We can also give you low-interest loans, we can exempt your taxes, give you discounts, just so long as we do this," said Erdoğan.

"We do not want our children to be competition horses"

Prime Minister Erdoğan also added that the closing of prep schools would mean children would no longer have to attend these classes on the weekends. "We don't want our children to turn into competition horses. They should spend their weekends with their parents or their friends and should experience their childhood." Erdoğan also drew upon the inequalities surrounding 'dershane' prep schools and the education they offer, by pointing out that they tend to be more frequently distributed amongst urban areas. "Why can't poor students take these lessons. Those who benefit from these courses are the kids of rich families in big cities," stated Erdoğan.

The Prime Minister also remarked that he has been stopped by citizens during tours of Anatolia, whom share their grief over 'dershane' costs and referred to a news report of a parent who committed suicide due to burden of 'dershane debt'.

This is a national issue, an education issue

"Only 15 percent of the total number of high school students in the country attend these prep schools," said Erdoğan adding, "however, when we first came into power, the questions presented in the university placement exam was based on 'dershane' curriculum, and not on what was learned in standard schools."

These prep school stake students educated in public schools, teach them a little test-taking technique and then claim they are responsible for the student's success in university placement, "What is this?" exclaimed Erdogan. "Why then do we have schools? If we have schools then why do we have prep schools'. If these prep schools are able to cover everything then why even have standard schools. This situation needs to be rectified," stated the Prime Minister.

Mentioning that they have staged extensive education reforms, Erdoğan recalled how they are the first government in power that has made receiving a 12-year education mandatory. Explaining that they closely student education systems throughout all developed nations in the world while taking this step, Erdoğan stated, "We have still yet to reach the level of quality we would like." The Prime Minister also shared that the National Education Ministry, the Scientific and Technological Research Council of Turkey (TÜBİTAK) and the Supreme Education Board (YÖK) are currently engaged in joint efforts to ensure university placement exams are compatible with state school curriculum , which he said will assure equal opportunities in education, will eradicate unfair competition and will allow for the transition to an examination system that will be based on school curriculum.

"There is speculation surrounding what may be behind this issue," said Erdoğan emphasizing that any speculation is irrelevant as he assured, "This is a national issue, an issue about education one that was included in our party's program years ago. This is a promise we made to our public."