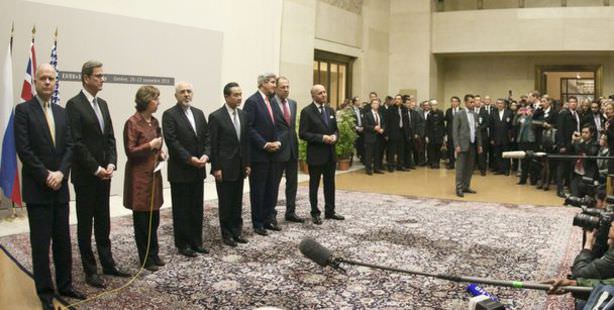 The Turkish Foreign Ministry as well as Foreign Minister Davutoğlu and President Gül issued statements on Monday welcoming the interim accord reached between Iran and the P5+1 on Iran’s nuclear program.

Foreign Minister Ahmet Davutoğlu commented on the historical deal reached between Iran and the United Nations P5+1 in Geneva on Sunday following over night deliberations from Bahrain, while on a three-nation tour that also includes Qatar and Iran. After lengthy deliberations that continued until early Sunday morning, the United Nations P5+1 and Iran reached an interim six-month deal in which Iran will limit its nuclear program in return for the easing of sanctions.

"Turkey considers the deal reached on Iran's nuclear program to be an important step and positive development," stated Davutoğlu adding that there may be some who are not pleased by the outcome. "This was an expected development and one that is important for building mutual confidence," said Davutoğlu also pointing out that Iran sanctions pose harm for Turkey and therefore lifting them will also have, "a positive impact in Turkey as well as create a positive atmosphere to ease tension in the region."
The Turkish Foreign Ministry also issued a press release on Monday stating, "We welcome the positive outcome of the negotiation process held with UN P5+1 countries in Geneva regarding Iran's nuclear program after three rounds of negotiations. In this framework, we congratulate Iran and the P5+1 countries for their constructive efforts in the process."

Referring to the agreement as an "initial step" and a "confidence-building measure," the Foreign Ministry statement read, "We call on the parties to continue their constructive approaches aiming at furthering the process. We hope the parties take the necessary steps agreed on at this stage, so that a durable solution to the issue is found in a mutually acceptable manner through diplomacy. Turkey, having made every effort until today to keep the process alive will stand ready to provide all support as necessary." The statement also acknowledges that Turkey continues to support the right to peaceful use of nuclear energy under the Nuclear Non-Proliferation Treaty as well as a zone free from all weapons of mass destruction in the Middle East.

"I welcome today's agreement on Iran's nuclear program. I have been advocating a solution through diplomacy and we hosted many diplomatic efforts in Turkey to this end. This is a major step forward. I hope it'll be sealed with a final agreement soon. I congratulate all parties for their constructive engagement," wrote President Gül.