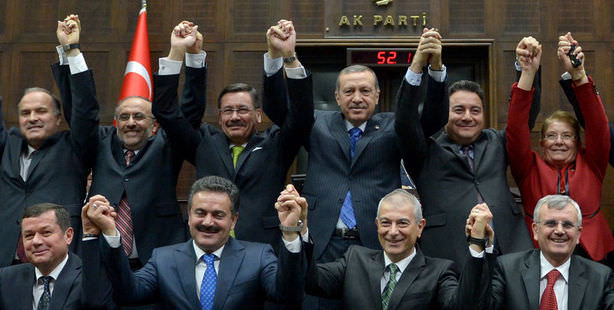 Prime Minister Recep Tayyip Erdoğan released ten names of the ruling Justice and Development (AK) Party's highly anticipated list of 81 provincial candidates in the March 30, 2014 local elections.
Ankara sees the return of Melih Gökçek running for a fifth successive term for Ankara mayor. Kayseri Mayor Mehmet Özhaseki will seek to be reelected for a third term. Konya Mayor Tahir Akyürek will also be running for a third spell. Yaşar Bahçeci is the deputy candidate for the Central Anatolian province of Kırşehir. Cafer Özdemir is the AK Party's candidate for the northern province of Amasya, while Burhanettin Çoban is also a familiar name for deputy candidate for the western province of Afyonkarahisar.

The AK Party also went for a number of changes amongst its list of candidates announced during Tuesday's parliamentary group meeting. Accordingly, Ercan Çimen will run for District Chairman in the northern province of Gümüşhane, Seyfettin Kalay will run in the western Black Sea province of Bartın and District Chairman Fatih Mehmet Erkoç is the AK Party's candidate for Kahramanmaraş, the southeastern province, which will run as a metropolitan municipality in the 2014 elections. Eskişehir Chamber of Trade President Harun Karacan has been named as the AK Party's Eskişehir candidate.

During an address delivered at the AK Party's parliamentary group meeting on Tuesday, Prime Minister Erdoğan drew upon those who felt discomfort following the historical meeting in Diyarbakir and spread certain slander in addition to attempts to muddy both people's minds as well as the resolution process. "No one can refer to us as dividers. We are struggling to clean the seeds of discord that were planted in this country by the CHP and the MHP for decades. Could Turkey have done well by avoiding confronting its own imaginary fears? Simply sweeping them under the carpet did not make them disappear," said Erdoğan.

"We reach solutions through safeguarding our unity and fraternity. We sensitively solve issues and not by breaking or dropping them. And we would be the first to stand up against any attempts of reaching a solution which will make the nation bow down to anyone," stated Erdoğan.

The Prime Minister added that no one should attempt to give them a lesson in nationalism. Pointing out that the Turkish Republic's flag, passport and currency has gained value since they have been in power. Erdoğan underlined that it is now well known all over the world that Turkey is a country that supports rights and courageously stands up against any form of injustice. Erdoğan also recalled that the leader of the main opposition party complained about his country when he went abroad.

Erdoğan also commented on the dissolution of the Constitution Conciliation Commission by stating, "We had hoped to draft a civilian constitution that respects everyone's language, faith and identity as was the case in 1921. However, they continued to pass the ball. Expecting these parties, which have cried out against the coup, to draft a civilian constitution was like rowing against the tide, however, we continued to put forth our best intentions." Pledging that they will continue to work sincerely on efforts to draft a new constitution, Erdoğan assured that they have not in any way backed down from their mission.

ON THE ENVOY CRISIS WITH EGYPT

Prime Minister Erdoğan also commented on the recent downgrade of diplomatic ties with Egypt by stating, "The coup regime is seriously troubled by our efforts to stand up for our Egyptian brothers. However, no matter how uncomfortable they may be and at whatever cost, we will continue to stand by the Egyptian public and speak the truth. We will continue to tell the world about the military coup in Egypt and the humanitarian drama unfolding there."

Commenting on the recent interim accord reached between Iran and the UN Security Council P5+1, Prime Minister Erdogan underlined that from their start they have defended the need for negotiations and solving the issue through dialogue rather than issuing sanctions on Iraq. "Our efforts were criticized more by our own opposition rather than from abroad. However, the deal in Geneva proves that Turkey's views were right."