FM Davutoğlu: “We said zero problems with neighbors, not tyrants” 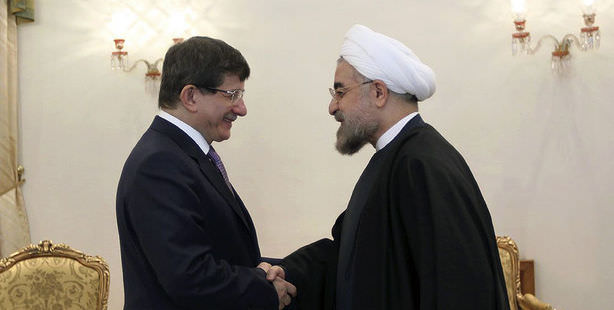 Speaking with reporters on his return from Tehran where he attended an Economic Cooperation Organization meeting, Foreign Minister Davutoğlu shared that the interim accord reached on Iran’s nuclear program has brought up morale and confidence and stated that Iranian authorities are intent on further developing ties with Turkey.

Foreign Minister Ahmet Davutoğlu released a number of statements to reporters upon his return from Tehran on Thursday. Foreign Minister Davutoğlu arrived in Iran on Tuesday to take part in the 21st Council of Ministers (COM) of the Economic Cooperation Organization (ECO) meeting. On Wednesday, he was first received by Iranian President Hassan Rouhani and later by his Iranian counterpart Zarif after which the two foreign ministers took part in a joint press conference. During his stay, Davutoğlu also had the opportunity to meet with Chairman of the Iranian Parliament Ali Larijani.

Davutoğlu explained to reporters that during his meetings he sensed an overall positive change in tone amongst the Iranian administration and pointed out that the agreement reached in nuclear negotiations with the permanent members of the UN Security Council has upped the moral and bestowed confidence on Iranian politicians.

Foreign Minister Davutoğlu also expressed that Iranian authorities are intent on advancing relations with Turkey and explained, "In fact, before I departed Tehran, Mahmud Vaizi, an individual who was also once a consideration for foreign minister, was appointed as the minister in charge of relations with Turkey."

Davutoğlu also announced that his Iranian counterpart Zarif and possibly President Rouhani will be arriving to Konya on December 17 to attend the Şeb-i Arûs ceremonies held in commemoration of the death of Sufi mystic and Islamic scholar Mevlana Jalāl ad-Dīn Muhammad Rūmī and stated that Prime Minister Recep Tayyip Erdoğan is planning a trip to Iran in January.

Davutoğlu responded harshly to allegations Turkey's zero-problem with neighbors policy has collapsed due to Syria by stating, "We said 'zero-problems with neighbors' not tyrants." Davutoğlu added that during his stay he had the opportunity to express his views of Bashar al-Assad to his Iranian contacts.

Foreign Minister Davutoğlu also shared with reporters a memory from 1978 back when he was 19 years old and living in London. "Iranian students were staging demonstrations against Shah Mohammad Reza Pahlavi. I would take a felt-tip pen and write slogans such as 'Turkey's youth stands by the Iranian people.' In fact, one time, the police attempted to bring me in. Whatever it was that I felt those days against the Shah is the same as what I am feeling against Assad. This is the policy that I defend," stated Davutoğlu.

This is a translation of an article originally written by Taha Kılınç.