Baghdad receives assurance and may be on board for N. Iraq oil deal 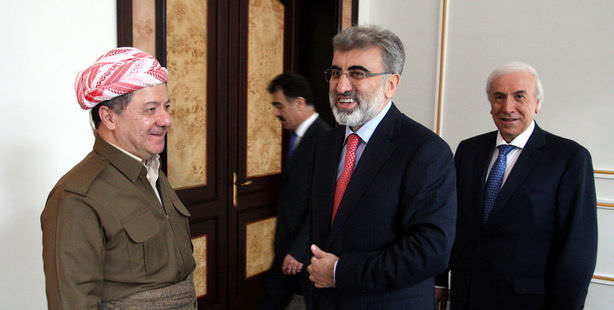 Turkey’s energy diplomacy has reaped promising results as the nation aims to engage in a tripartite mechanism with Iraq’s central administration and the Northern Iraq Kurdish Regional Government.

While in Iraq to hold a series of meetings as well as attend the 3rd Kurdistan-Iraq Oil and Gas Conference in Arbil, Energy Minister Taner Yıldız offered assurance to Baghdad of plans to position a measurement station along the border as well as a guarantee of revenue distribution which has managed to positively sway the central administration. As a result, a tripartite mechanism will be established between Ankara, Baghdad Arbil.

Turkey's efforts in engaging in 'energy diplomacy' have reaped fruitful results. During a recent trip to Baghdad, Energy and Natural Resources Minister Taner Yıldız delivered Iraq the message that they can relax as the "process will be transparent." The Baghdad administration on the other hand acknowledged the agreement reached between Turkey and the Northern Iraq administration. All parties have decided to establish a tripartite mechanism between Turkey-Baghdad and the Northern Iraq Regional Administration on energy agreements.

Prime Minister Recep Tayyip Erdoğan's orders were to eradicate Baghdad's most significant concern prior to the start of importing gas from Northern Iraq. As a result, during Minister Yıldız's engagements in Iraq, Ankara adopted a clear stance in regards to the issue of situating a measuring station along the border to calculate the petrol and gas being transferred, which may be the solution to resolve any concerns harbored by the Baghdad administration. Ankara also emphasized that all oil revenue will be distributed in accordance to Iraq's constitution. Therefore, by delivering the message that Baghdad will remain well informed of the scope of the petrol exported, concerns have for the most part vanished. Ankara also reiterated that the income to come in from the oil deal will be held in a public bank in Turkey and later distributed according to the Iraqi constitution and under the central government's observation.

'WE ARE EXTREMELY TRANSPARENT'

Minister Yıldız delivered a series of significant messages in discussions held during his visit to Iraq, the most important of which was relaying to Iraqi Deputy Prime Minister for Energy Hussain al-Shahristani just how transparent Turkey was on the issue. Noting that the agreement reached with Northern Iraq's Kurdish Regional Government Prime Minister Nechirvan Barzani during his spell in Ankara, will be to the benefit of all sides, Yıldız underlined that Turkey wants to further develop relations with Iraq. Yıldız emphasized the importance placed on Prime Minister Erdoğan's trip to Baghdad and relayed that Ankara is looking forward to hosting Iraqi Prime Minister Nouri al-Maliki in Turkey as soon as possible.

A TRIPARTITE MECHANISM IS FORMED

While attending the 3rd Kurdistan-Iraq Oil and Gas Conference in Arbil, Minister Yıldız had the opportunity to meet with KRG President Masoud Barzani, Prime Minister Nechirvan Barzani as well as other officials. Yıldız also worked closely with Shahristani and Barzani on the text planned to be released relating to the issue. Reading aloud the text, which was prepared in Turkish, English and Arabic, Yıldız stated, "We hope to begin a tripartite cooperation project that will be to the benefit of all parties as well as obtain the central Iraqi administrations approval for all commercial oil exports from the Iraqi Kurdistan Regional Administration to Turkey. We can comfortably begin meetings for this tripartite mechanism in Arbil, Baghdad or Ankara."

WE WILL NOT JUST SIT IDLY BY

Responding to questions posed by the Northern Iraqi Rudaw news website, known for its close affiliation with Barzani, Energy Minister Taner Yıldız expressed that Turkey does not want relations with the Iraqi Kurdistan region to remain temporary and aims to continue engaging with the same level of sincerity. "I have to say honestly that Turkey will not just sit idly by when it comes to these energy resources located near Turkey. Iraq will benefit from Turkey's stability, which is not something that should come as a surprise. According to our speculation, with a 15-year-agreement, wherever it is made, at least 1.5 million barrels of Iraqi crude oil will be transferred over the Kirkuk-Ceyhan pipeline."

Underlining that the process of purchasing petrol and gas should proceed in a manner that does not lead to sensitivities and that approval should absolutely be obtained prior to the exporting of petrol, Energy Minister Yıldız stated, "Hopefully, we will experience a time in which petrol and natural gas exported from Iraq reaches 7-8 million barrels. We consider Iraq to be an entire and indispensible part. The deals we have made with Northern Iraq and the central administration will contribute greatly to Iraq's normalization."

BARZANI: NO ROOM FOR FEAR

Speaking at the energy conference in Arbil, KRG President Nechirvan Barzani assured that oil deals with Turkey posed no risks to either side and stated, "The energy agreements we have reached with Turkey today marks the start of a new Iraq and there is no room for fear. All discussions and debates are taking place on legal grounds."

During his time in Arbil, Minister Yıldız had the opportunity to meet with KRG President Masoud Barzani during which the two reportedly discussed relations between Turkey, Iraq and the Kurdish Administration as well as the recent developments regarding oil deals with the latter. Yıldız also met with his KRG counterpart Natural Resources Minister Ashti Hawrami and Electricity Minister Sheikh Ebubekir Yasin.