Education Minister Avci: “Our education system is headed for reforms” 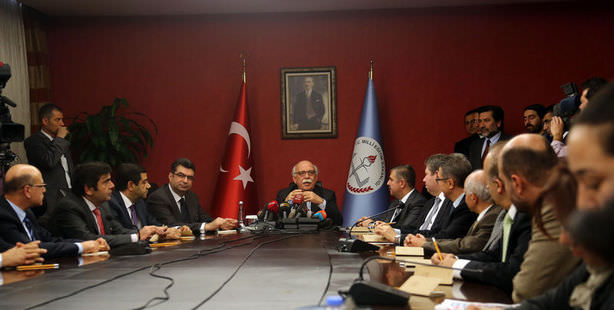 A meeting between National Education Minister Avcı and four umbrella establishments for ‘dershane’ high and university exam placement prep schools as well as 12 ‘dershane’ representatives, has reaped a consensus. Avcı announced on Tuesday plans to work in conjunction with prep school owners on formulating the transformation legislation which foresees these exam tutoring centers being transitioned into private schools.

National Education Minister Nabi Avcı announced on Tuesday that along with the transformation of the 'dershane' prep school system. Turkey's education system has entered a serious reform process that incorporates both the system's infrastructure as well as its entire general framework.

Sharing that he had the opportunity to meet with the umbrella establishments that represent all 'dershane' prep schools; Minister Avcı announced plans to work in conjunction with 'dershane' representatives on the transformation legislation planned for the exam prep school system.

Minister Avcı held a meeting with four umbrella establishments that represent private 'dershane' prep schools as well as representatives from 12 'dershanes' at the Ministry of National Education on Tuesday. After the meeting, Avcı was joined by prep school representatives, as he released a series of announcements on the progress established at yesterday's meeting to reporters. "Today, we are discussing the matter a few steps ahead of where we were last week. From here on out, our negotiations will continue to gain momentum," stated Avcı.

Minister Avcı explained that the views and suggestions shared during previous meetings with 'dershane' representatives were reflected in the presentation made to the Council of Ministers and stated, "From here on out, we will continue our efforts to work alongside our stakeholders in the sector in a more concrete manner in terms of how this process will proceed from both a timeframe and content standpoint."

Avcı shared his hopes that efforts will not result in anyone being aggrieved, which he said is what they are working on ensuring, while also adding, "as well as primarily establishing the most appropriate educational environment for our children."

Avcı pointed out that a new level will have been established in the education sector by the start of the 2015-2016 school year, and stated, "We have ongoing efforts in regards to the university admissions and the entrance exam system as well as a strategy document on educators. The FATİH Project will also contribute to this process. Turkey's education system has entered a serious reform process that incorporates both the system's infrastructure as well as the general framework."

All Private Education Institutions Association (TÖDER) Vice President Taşel: "Intentions are for no one to suffer."

TÖDER Vice President İbrahim Taşel stated that the new legislation will not result in employees or those receiving services suffering and explained that the legislation will be drafted through communication with stakeholders. Pointing out that the framework and intentions are clear, Taşel, "Intentions are to ensure no one is left aggrieved and within its framework will be the realization of a transformation that intends to benefit as much as possible from these experienced 'dershanes', their teachers as well as their course-offering capacity."

ÖZ-DE-BİR Chairman Faruk Köprülü, who also attended the meeting, shared that the association has 3,600 prep schools and nearly 100,000 employees and expressed how pleased they were that this legal process has advanced to this stage through an exchange of views and not through causing outbursts. Pointing out that the statements released have been comforting for the sector through this transitional process, Köprülü added that registration for prep schools will continue this January for the upcoming period. Emphasizing that parents, founders and teachers should not be worried, Köprülü stated, "We will finalize this process in an appropriate manner, through collaboration and ensuring that no one suffers in the process."