PM Erdoğan: "The parliament is where problems are solved" 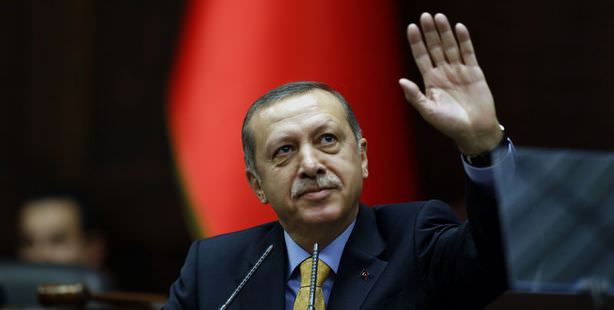 Prime Minister Erdoğan emphasized that the parliament is where every single matter in Turkey is solved and emphasized, “The volition for a solution cannot be usurped.” Erdoğan also revealed a third wave of candidate names for next year’s local elections.

Speaking to fellow members of the ruling Justice and Development (AK) Party at a parliamentary group meeting held on Tuesday, Prime Minister Recep Tayyip Erdoğan emphasized the power of national will and that the parliament is where problems are solved in Turkey and stated, "We will not allow any force to overcome the volition for a solution."

Prime Minister Erdoğan stated that theirs is a struggle of bringing great efforts to Turkey on the one hand, while also establishing the solid foundation for these efforts to be permanent and for new ones to follow. "This solid foundation will undoubtedly be the manifestation of the freedom and independence of national will. The Turkish nation has absolutely no need for guardianship or custodians," said Erdoğan.

The Prime Minister explained that during the coalition era organized gangs, dark focuses and certain capital circles and media establishments were able to change the government as they pleased. "Civil society, associations, foundations and unions can issue criticism and submit proposals however they cannot insult," stated Erdoğan adding, "It is Turkey's Grand National Assembly that will make the ultimate decision. It is the deputies elected by the nation, and the government they are nominated for. The nation will keep those they want in power and overturn those they do not want."

Turkey's Grand National Assembly is where the national will, the power of elections and democracy needs to be upheld at the highest level, explained Erdogan adding, "If any deputy or political party believes that they do not hold the authority themselves and that instead it belongs to forces outside of the assembly, then that deputy or political party has denied themselves from the very start. The Assembly cannot surrender its volition to forces outside of the Assembly," emphasized Erdogan.

"We will not allow any force to overpower the Assembly, politicians or the national will. The place where every issue in Turkey is solved is Turkey's Grand National Assembly. Politics are where a means to a solution are sought. No armed terrorist, illegal organization, newspaper headlines or capital circles can usurp the solution volition of the Assembly and politicans under any circumstances," Erdogan told fellow party members on Tuesday.

Prime Minister Tayyip Erdoğan also revealed a third wave of candidates for the March 2014 local elections, bringing the total number of names released thus far up to 47. When announcing current Justice Minister Sadullah Ergin as the AK Party candidate for mayor of Hatay, Prime Minister Erdoğan slammed criticism from the opposition that members of the cabinet should resign immediately after being declared as candidates, by stating, "We know better than you, when our candidates should resign. The Supreme Election Board will announce the election calendar and we will take these steps."

Justice Minister Sadullah Ergin has become the second current minister who will run for a mayoralty in the March 2014 elections. Prime Minister Erdoğan also announced last week that Minister of Family and Social Policies Fatma Şahin will run for Metropolitan Municipal Mayor of Gaziantep in the upcoming elections.

The newest round of candidates announced for the local elections are as follows: