“The government was the defendant and the others were the jury” 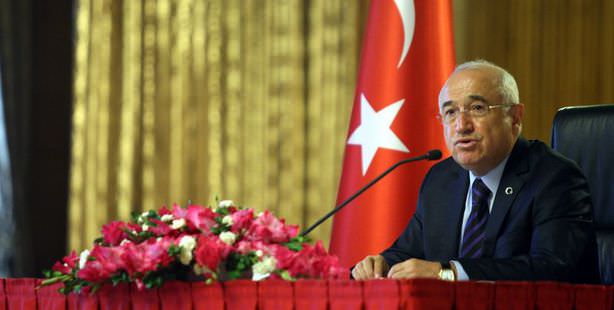 "There are politics in Turkey that are off the books,” says Parliamentary Speaker Cemil Çiçek, explaining that in 2004, there was a party in power that was subjected to ‘controlled freedom’, in reference to recent allegations of profiling in a National Security Council (MGK) meeting nearly a decade ago. “At that time, in the MGK it was as if the government was the defendant and the others were the jury,” said Çiçek.

The tension spurred by the state's intention to close 'dershane' high school and university exam prep schools, which escalated to claims of profiling as a result of a proposal put forth in a National Security Council (MGK) meeting in August of 2004, continues. Current Parliamentary Speaker Cemil Çiçek, who was Minister of Justice at the time the MGK meeting in question took place nine years ago, explained to SABAH the back stage details of what transpired at that time. Pointing out that in Turkey there is an area of politics that are 'off the books', Çiçek shared the following details:

"Is there anyone who does not know what the conditions were like back in 2004? The nation wanted the AK Party to come into power in 2002, however did those who were supposed to accept this do so? Were those who are able to comfortably discuss and write about issues now able to do so and take a stance ten years ago? Never mind 2002 or 2004, just look at what was written on April 28, 2007. Despite it being appropriate according to the constitution, there was a Turkey that could not select its own president. In 2008, a case was filed to shut down the AK Party. In other words, the AK Party was considered to be some sort of internal threat. In 2004, the AK Party was a party in power that was literally subjected to 'controlled freedom'. There was the mindset of "they cannot be left to their own devices. When you look at the diaries and documents from 2004 you can see that the conditions in Turkey were not that of a democratic country."

* Do you remember the August 2004 National Security Council meeting?

"Of course. Every five years, there is a National Security Policy document that is accepted. These documents contain assessments regarding national security risks. Separatist terrorism and fundamentalism were considered to be two significant threats at that time."

* Why was the National Security Council suggested proposal signed?

"Under those conditions, the government tried to do whatever was right. You cannot evaluate the conditions that existed in 2004 based on the conditions that exist in 2013. If you recall previous National Security Council (MGK) meetings, even before the meeting took place, weren't there articles published that would write, 'the government will be cornered and asked this or that'? There was this type of perception amongst the public. The government was the defendant, the others (in reference to former President Ahmet Necdet Sezer and the MGK's military members) were the jury, and politicians were held accountable there. Just take a look at what was written after these meetings. This situation is being assessed as if these sorts of things did not happen in this country?"

'IT WAS SOLVED THROUGH PATIENCE'

"It may not have been mandatory. However, one must also pay attention to the developments that followed. The ones that need to pay heed are the ones that personally bear the responsibility. It is of no concern to outside observers. Those who drag you into debate by asking, 'Why did you or did you not sign?' would later immediately place blame by stating, 'They run the state and therefore they shouldn't have done it this or that way.' The government evaluates the conditions. A number of issues that were not able to be resolved through patience and peace due to the conditions in 2004, are able to be dealt with now."

* Why were politicians' area of movement so restricted in 2004?

"In Turkey, a significant part of politics is done off the books. This was a time when people who were not in charge of politics and law, by way of the nation, still had influence as if they were authorized through politics or law. Sometimes this can be the state's organs, sometimes it can be capital or other pressure-exerting groups. This is politics conducted off the books. Why is it that at one time in Turkey, every holding had a bank, a newspaper and a television station? Was this due to their love of freedom of thought and press? Or is it that a majority of these were acquired as a means to manipulate politics? The off the books part of politics were not sufficiently put onto the books."

"Those who approach this situation without prejudice will be able to see the intentions present in bringing a document from 2004 to the agenda in 2013 in relation to the 'dershane' prep school debate."

* How did you change the National Security Policy Document?

"The conditions normalized. Reforms have reaped their fruit to a certain degree. Turkey has become an environment were issues can be debated. The government has eradicated the factors that used to be defined as threats."