Visa regulations with EU nations to be lifted in next 3.5 years 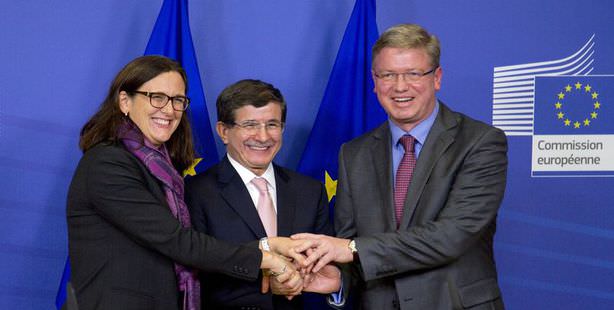 Foreign Minister Davutoğlu announced on Wednesday that Turks will be exempt from visa regulations to visit EU nations by 2017 at the latest and stated, “If Turkey tells the European Union ‘I am ready’ before the timeline established, than the process will have an even earlier head start.

The torture of attempting to obtain visas for travel to European Nations by Turkish nationals will be coming to an end within the next three-and-a-half years as Turkey and the EU have agreed to sign the highly anticipated Readmission Agreement on December 16 in Ankara in return for the start of visa liberalization dialogue to exempt Turkish nationals from EU visa regulations within the next three-and-a-half years.

Foreign Minister Ahmet Davutoğlu who attended a NATO foreign ministers meeting in Brussels on Wednesday and also met with Cecilia Malmström, member of the European Commission in charge of home affairs, and Stefan Füle, the EU commissioner for enlargement. Davutoğlu shared the good news with SABAH about the impending visa liberalization for Turks and delved into the finer details of the historical agreement.

Explaining that the past four years of arduous diplomacy by Turkey has altered EU literature, Davutoğlu stated, "The Readmission Agreement will be signed within a month. Afterwards, Turkish citizens will be exempt from visa regulations within three-and-a-half-years time."

NOT A FACILITATING OF VISAS, AN EXEMPTION: Explaining that a consensus was reached during Wednesday' NATO foreign ministers meeting in Brussels, Davutoğlu stated, "Up until now, they figured that visa exemption would not be granted prior to the signing of the Readmission Agreement. However, I directly requested visa exemption. The EU was quite surprised by this and were in fact shocked when we made the request." Relaying that the EU requests Turkey transition to a biometric passport system, integrated border management and the signing of the Readmission Agreement, Davutoğlu stated, "Throughout this process, we have realized all of these demands.

NO DIFFICULTIES FOR THREE YEARS: With the Readmission Agreement, Turkey has agreed to accept migrants who illegally entered into the EU via Turkey. However, according to the agreement reached with the EU, Turkey citizens will be granted a three-year transition period to visa liberalization parallel to the signing of the Readmission Agreement. At the end of this period, a pilot procedure will commence and in line with the agreement, visa exemption is foreseen for Turkish nationals visiting EU nations.

TURKEY HAS A RIGHT OF RESCISSION: Foreign Minister Davutoğlu also pointed out that Turkey will maintain the right to rescind the agreement throughout this process. "This is a condition we established. Turkey may announce a cancellation of the agreement within six months time. Although they made us a promise, should they not comply with initiating the visa liberalization process, we will rescind from the agreement," stated Davutoğlu.

WE WILL ALSO PREPARE OURSELVES: Davutoğlu noted that Turkey will not be accepting the return of any migrants within the framework of the Readmission Agreement in the next three-year transition process and stated, "We have expressed our concerns regarding a flow of migrants. There will be no burden of the agreement in the next three years. During this timeframe, we will prepare ourselves. EU funds will also assist in bearing the burden."

THREE-AND-A-HALF YEARS AT THE LATEST: Davutoğlu explained that the visa liberalization will begin immediately following a three-year transition period and a six-month pilot program and stated, "Three-and-a-half years will be the latest timeframe. In other words, 2017 will be the latest date visa exemption will begin. For example, if in a year or a-year-and-a-half from now, Turkey tells the EU it is ready to implement the Readmission Agreement, then visa exemption will begin six months after this notification is made."

THE TURKEY MODEL: Davutoğlu also explained that he delivered the message during negotiations that a verbal promise would not be acceptable and stated, "The EU initially stated, 'Let's give you a personal guarantee.' We, in turn, responded by stating, 'A personal guarantee will not do. If it is a verbal promise, then it should be verbal, if it is a written promise, then it needs to be written out, if there is a process, it will be returned with another process and everything will be equal.' They also added Turkey's concerns to the road map prepared, which as a result means we have gained the EU a new decision making format."

IT WILL NOT BE REMINISCENT OF THE CUSTOMS UNION: Davutoğlu recalled that during his time as an academic he opposed the Customs Union agreement and stated, "When I was an academic, the Customs Union was signed and I opposed, stating, 'Turkey should not open up to a Customs Union before Turkish citizens are allowed to freely travel.' I do not want to be subjected to the same criticism by going down in history as the first minister to sign a Readmission agreement without obtaining visa exemption."