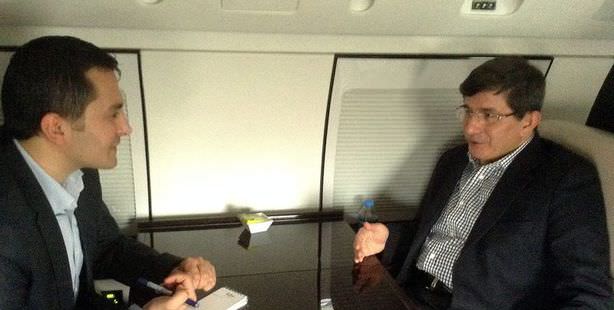 After meeting with his Armenian and Azerbaijani counterparts in Kiev, on Thursday Foreign Minister Davutoğlu announced plans to head to Yerevan on December 12. “There is a new environment of peace in the Caucasus,” says Davutoğlu.

Turkey is about to take the initial step to establish peace in the Caucusus between Armenia and Azerbaijan. After meeting with his Armenian and Azerbaijani counterparts in Kiev on Thursday, where he attended an Organization for Security and Cooperation in Europe ministers meeting, Foreign Minister Ahmet Davutoğlu announced plans to attend a Black Sea Economic Cooperation (BSEC) meeting in Yerevan on Dec. 12.This new development marks the first diplomatic step towards establishing peace in the Caucasus.

Speaking to SABAH prior to his departure, Foreign Minister Davutoğlu delivered a message to Armenia that once they choose to stop occupying their neighbor's territory there will no longer remain any obstacles towards establishing camaraderie.

AN ENVIRONMENT OF PEACE IN THE CAUCASUS: Foreign Minister Davutoğlu stated that the conditions are now appropriate to establish a new environment of peace in the Caucasus. Pointing out the new momentum gained in dialogue between Azerbaijan and Armenian as a result of energy projects such as the Trans-Anatolian gas pipeline (TANAP), Davutoğlu stated, "Sargsyan has spoken with Aliyev and we have also had contact with both sides. During our Prime Minister's trip to Russia, we had the opportunity to discuss the situation in the Caucasus extensively with Russian President Putin. Elections have been held in both Armenian and Azerbaijan. The conditions are now appropriate for both sides to take an initiative."

TURKEY HAS TAKEN THE GREATEST INITIATIVE: "The greatest initiative has actually been made by us. Through this intense diplomacy, a new atmosphere is being created in the Caucasus. We have exerted serious efforts to overcome the issues between Turkey and Armenia,' stated Davutoğlu.

THERE IS NO OBSTACLE TO BEING FRIENDS: Foreign Minister Davutoğlu recalled how last year he told an Armenian parliamentarian that 'According to our foreign policy there are two categories of nations' and said, "The parliamentarian was expecting for me to say that the two categories were 'friends and enemies', however, I said, 'there are friendly nations and potentially friendly nations.' Armenia falls into that second category. Even if there is contention today, these are nations in which relations could be repaired with tomorrow," said Davutoğlu, adding, "Once you choose to stop occupying your neighbor's territory there will no longer remain any obstacles towards establishing camaraderie."

OUR RELATIONS ARE TIED TO PEACE: Davutoğlu explained that there are three separate aspects in Turkey-Armenia relations that could either serve or pose an obstacle to the nations supporting one another, which he described as follows: "Turkey-Armenia relations as two neighboring nations, peace between Azerbaijan and Armenia in the context of the Caucasus and establishing a global environment of peace between Turkey and Armenia. If these aspects function together, then permanent peace could be established. However, if we pursue one aspect while leaving the others unsolved, relations will remain fragile," stated Davutoğlu.