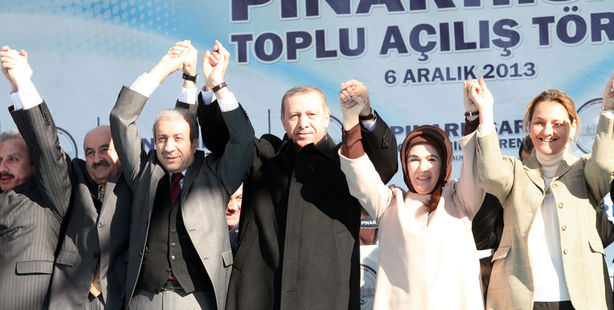 Prime Minister Erdoğan paid a visit to Pınarhisar, where he once he served a four month prison sentence for reciting a poem, for the first time in 14 years on Friday as part of a visit to provinces in the Thrace region. “We built the foundation of the AK Party and took the first step towards establishing a new and great Turkey in the Pınarhisar Penitentiary,” Erdoğan told the crowds at a joint inauguration ceremony held in the Kirklareli district.

Prime Minister Recep Tayyip Erdoğan made a historical return to the province of Kirklareli, where he once served four months at the Pınarhisar Penitentiary for reciting a poem in Siirt in 1999 when he was the mayor of Istanbul. This time, 14 years later, Erdoğan made his return to Pınarhisar to conduct a joint inauguration ceremony as Prime Minister. "For me, Pınarhisar is a symbol of rebirth. We planned the founding of the AK Party (the ruling Justice and development Party) in the Pınarhisar Penitentiary. It was there we took the first step towards establishing a new and great Turkey," said Erdoğan.

Prime Minister Erdoğan kicked off a tour of the Eastern Thrace region on Friday, by addressing crowds at a series of mass inauguration ceremonies held in Pınarhisar, Kırklareli and Lüleburgaz.

"After an extended period of time, we have returned today for the first time to Pınarhisar. As you know, I came to Pınarhisar 14 years ago for a poem I recited in Siirt. They thought that had convicted me and supposedly took my freedom away. However, Pınarhisar does not remain as a prison in my memories, instead for me it is a school. For me, Pınarhisar is a symbol of rebirth," stated Erdoğan.

"Pınarhisar is a district of historical importance in the birth of a new and great Turkey and of the meeting of Turkey's essence and spirit. We made the plans to found the AK Party in the Pınarhisar Penitentiary; it was there where I contemplated our future plans and programs. I drew the AK Party's route through the signals I received in the thousands of letters that came to Pınarhisar. We set out from Pınarhisar, where we took the first step towards establishing a new and great Turkey," Erdoğan told the crowds.

Since then, for the past 11 years, the AK Party has extended its hand to the public in all of Turkey's 81 provinces, in all counties, districts and villages as well as in all global capitals and all cities in need in the world, explained Erdoğan adding, "One by one we have lifted all of the reasons that your brother was brought to Pınarhisar for 14 years ago. I served in the Pınarhisar Penitentiary for reciting a poem. Thousands of people in this country have been subjected to the torment I suffered and even more so just for reciting a poem, singing a song or for writing something. Some were even forced to desert their homeland, while some were forced to spend years in prison. Some were killed in the middle of the street, their lives taken from them in unsolved murders."

Drawing attention to the significant democratic reforms that have been made over the past 11 years, Erdogan asked, "When I was in the Pınarhisar Penitentiary, was there a university in Pınarhisar? Now, we have a university in Kırklareli. We have lifted all of the obstacles against freedom of thought and expression. We have fought against criminal and dark organizations. We have gained this extraordinary state. We have staged numerous reforms in order to ensure our laws meet European Union standards."

Prime Minister Erdmann also announced that there may be good news to come on December 16 and stated, "Hopefully, Turkey will begin a whole new era with the EU. You will also hear the news on the 16th of this month, I won't say anything now. But you will hear the news on the day that we sign on."

Describing democratization as an unending process that renews itself at any moment, Erdoğan said that it is with the strength they gained from the nation that allowed them to continue on their path of reform, a process which he said, is not over. Prime Minister Erdoğan also referenced a new 18-article draft legislation sent to the Parliament by the Prime Ministry, which includes reforms in 11 distinct areas. "Hopefully, we will discuss and vote on this legislation and afterwards Turkey will also be able to embrace these new reforms," stated Erdoğan.

Recalling how a century ago during the Balkan Wars Enver Pasha went to Edirne to save the region from the enemy, Erdoğan stated, "There were some that said at that time that, 'a Bulgarian might as well enter Edirne if Enver is going to.' This mentality still remains. There are some that say that whatever happens to Turkey can happen so long as the government is not successful. While we work on trying to solve issues, there are some that are doing everything in their power to ensure they remain unsolved. Once we save this country from the terrorism predicament, then no one will be able to hold Turkey back," said Erdoğan.

"All of the ethnic elements in this country are within our concept of nation and we have gathered under the roof of citizenship of the Republic of Turkey and are taking strides towards the future," stated Erdoğan.

'WE ARE ALL HERE TOGETHER'

Friday evening, Prime Minister Erdoğan addressed fellow part members in Tekirdağ at a dinner held at the Ramada Hotel. During his address, Erdoğan reiterated that they are not in any way concerned with people's lifestyles and style of dress and stated, "Those who do not wear headscarves and those who do are all our sisters that we hold close to our hearts. No one has the right to dissociate this." Pointing out that in the past, wearing a headscarf was used as a reason to not allow people entry into universities or public buildings, Erdoğan asked, "What happened? Has Turkey been divided or shattered? Not at all, just look around you in the same hall, in the same location and side by side those wearing headscarves and those who do not all provide services. To whom? To our nation. Is there any issue," asked Erdoğan adding, "What was this anguish, suffering and oppression?"

Erdoğan also recalled efforts to shut down the AK Party through articles published in the press and stated, "They set up numerous traps. However, it is justice that sets the true trap above all others and therefore they were unsuccessful. This is because we have never bothered with anyone's ethnic identity, language or religious sect, as we do not have these sorts of concerns and we never will. We uphold an equal distance with everyone," emphasized Erdoğan.