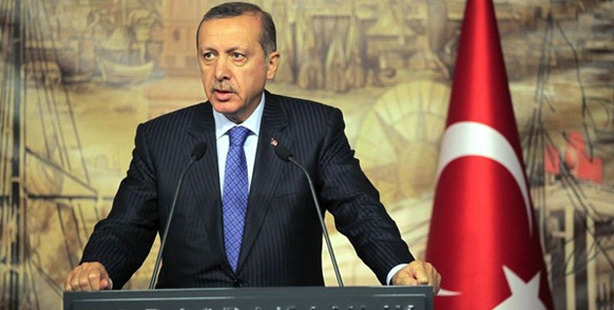 During a press conference held at his office in Dolmabahce Palace, Prime Minister Recep Tayyip Erdogan made some remarks regarding the recent developments in Turkey.

PM Erdogan stated that thanks to the standing victories of his party AK Party till this day, as well as the support of his voters, it is possible to predict the result of the upcoming Mar 30 elections. "Thanks to our extensive research, we can easily predict that we will win by a landslide" he said.

He continued his speech by saying "The nation's increasing support for us has disturbed some local and foreign circles. Those who are unhappy with the steady and peaceful growth of Turkey are working hard to hinder it. Our active foreign policies and our growing global and regional power have disturbed these circles. Our economic growth and increasing prosperity leading to the increased use of energy resources and the steps taken by our government to fulfill such needs have also disturbed certain communities, not to mention our venturing into new markets and growing share in the international market. Finally the reforms we made, particularly the steps we have taken for the peace process and democratization have disturbed those who feed on instability both in our lands and beyond."

The Prime Minister continued his statement by saying that the Turkey of the past was quite profitable for those certain circles capitalizing on such deficiencies, yet the New Turkey has become their nightmare as it gains its strength from the will of the people.

"For 11 years we fought this battle"

Prime Minister Erdogan underlined that in democracies, governments are elected and discharged according to the will of the people and continued; "There is no confusion on this matter. While Turkey is trying to become more democratic since 1946, our governments have been appointed by outside forces instead of relying on the will of the nation in more than one instance. As you know the will of the nation does not lie with the armed forces. Media, capital and many local and international interest groups have tried to wear out our government .There were instances when the abovementioned formed alliances with each other and the armed forces." He then went on to mention that the last time politics was orchestrated through the armed forces in addition to several media companies, capital groups, NGOs was Feb 28, a date in Turkey's history generally referred to as the "post-modern coup", and that these troubled times came to an end with the rise of the AK Party. "We fought against these forces for 11 years so that the people's reign may stand supreme."

"Under a corruption guise…"

Regarding the Istanbul-based Dec 17 operation, Prime Minister Erdogan stated, "Under the guise of corruption, yet having various dimensions, this operation is by no means an innocent routine legal procedure. With many differing objectives in a package under the disguise of a legal operation, the intention is to kill not three birds with one stone, but an entire flock."

"Operation was neither innocent nor a routine legal transaction"

Prime Minister Erdogan reported that the operation was kept hidden for 14 months and started by bypassing all judicial and police hierarchy. "Although this operation was disguised as a corruption probe, it had many additional motives within that package. It almost aimed to kill not three birds with one stone, but an entire flock." He also criticized the media's involvement since the beginning of the operation and blamed the judiciary for not keeping what should have been kept confidential. "The name given to the operation by the media was also significant; "Bribery and corruption operation." It was launched as though it was the biggest corruption operation of all times in the history of Turkey. From the early hours of the morning, numerous press and visual media channels and social media platforms used these terms and the notion swiftly spread. Immediately afterwards, documents, information and photographs, which should have been kept confidential were leaked to the media illegally."

Erdogan also blamed the method of the interrogations. "One of the prosecutors said to one suspect, 'You have only two minutes, tell us what happened and then leave,' with his hands in his pocket. Is this how legal interrogations should take place? Is this how the judiciary should act?"

"An assassination against national will"

Prime Minister Erdogan emphasized the obligation of the judicial authorities to act according to the laws with regards to such an operation and that if there are any unlawful acts, then, they will be punished accordingly. "I declared this over and over in my public speeches. Whether they are a member of my family wouldn't matter, we would always stand by the laws. But it is apparent that the objective here was not to fight against corruption but to paralyze national will." He also stated that this operation had intentionally aimed to bring Turkey's growth to a halt since many of the public names mentioned were investors in or are to be involved in very large investments.

The investors accused with the corruption claims have been involved in millions of dollars of investments not only during the rule of this government but before, said Erdogan. Since the names of contractor firms involved in tenders of the 3rd airport and the 3rd bridge to be built in Istanbul were allegedly involved in the corruption operation, the Prime Minister expressed his concern over whether these firms' reputation and credibility have been ruined. He accused those who he refers to as the "gangs within the government" or the "parallel government", as discrediting such investors' reputations.

Since day one, the operation has been viewed as a clash of power between the execution and judiciary. In his speech, Erdogan also compared how the execution and judiciary are elected and said, "You have not been elected by the people's will. You have been assigned to your judicial positions. If sovereignty unconditionally rests with the nation, the ones who have been elected by the nation itself will have something to say."

Erdogan described this turmoil as a judiciary coup, during which sovereignty was attempted to be taken away from the nation and transferred to judiciary and continued, "We realized this, resisted against it, stopped it and we will continue to resist against it. In Turkey, governments are only elected and removed by what comes out of the ballot box. We will not let anything other than the nation's will to change the government. What we are against is an important threat to Turkey's stability, independence and future. We will not allow anyone to ruin Turkey's future, its independence and stability."

On the subject of upcoming elections, Prime Minister Erdogan gave examples of AK Party's achievements within the last 11 years. He gave examples from all the reforms, works and projects they have accomplished and ended his speech by wishing that Turkey will also come out of this turmoil as a stronger country.
Last Update: Jan 06, 2014 12:42 pm
RELATED TOPICS