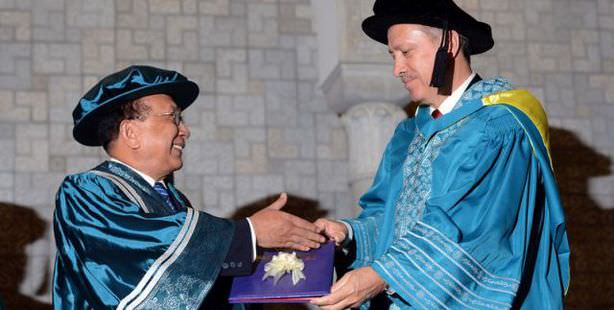 The two PMs said that they seek to boost their economic relations and discussed regional and international issues.

Speaking at a joint press conference with his Malaysian counterpart in capital Kuala Lumpur, Erdogan remarked that both countries approach regional and global developments from the same perspective as reflected through their United Nations, Organization for Islamic Cooperation (OIC), and D-8 partnerships.
Following their bilateral meeting, Erdogan and the Malaysian PM met with delegates at the Malaysian prime ministry building.

Erdogan signaled that the free trade agreement is planned to be signed in April, during the Malaysian PM's Turkey visit.

With the current trade volume between Turkey and Malaysia at $1.5 billion, the two PMs underlined their plan to increase this to $5 billion in the next five years.
Meanwhile, the two countries agreed to abolish visa requirements as an incentive to strengthen the relationship.