IHH the victim in war of public opinion 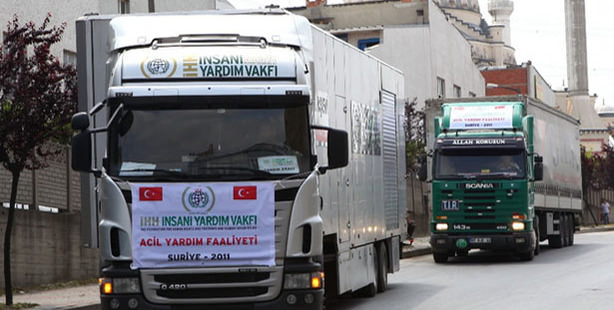 IHH has held Special Consultative Status within the United Nations Economic and Social Council since 2004, yet Western media is eager to depict the organization as a terrorist proxy.

The Istanbul based Foundation for Human Rights and Freedoms and Humanitarian Relief (IHH), known for its well-designed aid programs in more than 120 countries, has been falsely accused of having links to terrorist organizations because of its good relations with all regional actors.

Prominent Turkish journalist Taha Kılınç stated that in order to support people in need of humanitarian assistance, IHH has developed good working relationships with every party in the region regardless of sectarian affiliation or political position. It has even maintained relations with extremist elements in Syria to ensure that assistance reaches the Syrian people.

IHH has held Special Consultative Status within the United Nations Economic and Social Council since 2004, yet Western media is eager to depict the organization as a terrorist proxy.

"They took part in the operation to free Turkish photojournalist Bünyamin Aygün, who was being held by the Islamic Front. Aygun himself praised IHH for its success in humanitarian diplomacy and expressed his gratitude for its role in securing his release. IHH also saved two journalists from Bashar Assad's prison in Damascus at end of the 2012 by carefully approaching the Baath regime. IHH can reach both sides," Taha Kılınç added.

However, a recent incident raised eyebrows regarding IHH's work in Syria. At the beginning of January, center-left Turkish newspaper Radikal Daily, reported that an IHH aid truck allegedly carrying weapons and Turkish National Intelligence officers was intercepted on its way into Syria by the Turkish gendarmerie following a prosecutor's order. The report caused a wave of protest on social media before it was revealed that the truck was not at all connected to IHH. Officials of the organization accused the rival Gülen Movement for spreading rumors and publishing the story in their English-language newspaper, Today's Zaman.

The Gülen Movement is led by Turkish cleric Fethullah Gülen, who is in self-imposed exile in the USA. It is believed that Gülen has many ardent followers within the Turkish judiciary and police force. IHH is widely seen as closely linked to Prime Minister Erdoğan's government, a point of attack for Gülenists.
Gülden Sönmez, a lawyer and an IHH member had this to say on Gülen's treatment of IHH, "The Gülen Movement, which is not a fan of IHH, is trying to convict Turkey for its humanitarian attitude towards Syria. Speaking to the Wall Street Journal, Gülen noted that he disapproved of the Gaza flotilla that angered Israel, and said that IHH should have sought permission from the Israeli government. Apparently they don't support IHH and are trying to make a leap from the truck incident to Turkish government policies. We're an independent foundation. This is just wrong."

Hüseyin Gülerce, a writer for Today's Zaman with close personal ties to Gülen himself, told the New York Times last December that it was the Gaza flotilla incident that created the first cracks in Erdoğan and Gülen's relationship. "Mr. Gülen's attitude was very clear, as he always suggested that Turkey should not be risky in its foreign policy and stay oriented to the West, and that it should resolve its foreign policy issues through dialogue," Gülerce said.

Sönmez also refuted claims that IHH is working with extremist groups like the Al Qaeda linked Islamic State of Iraq and the Levant (ISIS), stating that their aid convey in Syria was assaulted by ISIS last October and one of their drivers was killed. "We're trying to help people in Syria with hundreds of volunteers. We need to ensure their security by maintaining relations with all parties and not supporting one particular actor," she continued.

Ufuk Ulutaş, a columnist at the national daily Aksam, agreed on the connection between the flotilla incident and recent pressure on IHH. Last week he wrote, "IHH became popular within various Islamic circles after the flotilla incident in 2010. It is easier using IHH, which already has problems with Western-backed Israel as a tool to attack the Turkish government by claiming it helps Al Qaeda. This is an operation to change perceptions."

Despite the allegations, IHH is pushing on with its Syria campaigns. The organization announced plans to reach $50 million in donations for Syria in 2014, and promised not to leave the country until the war comes to an end.