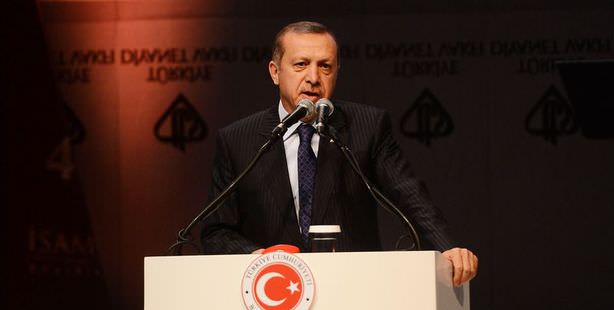 Turkish Prime Minister Recep Tayyip Erdoğan was in Brussels for a series of talks with EU officials on his first visit in five years to the heart of the European Union. The visit came amid an ongoing campaign by the Gülen Movement against Turkey's elected government. The Turkish government's attempts to weed out Gülenist conspirators in the judiciary and police has drawn criticism from EU officials. European Commission President Jose Manuel Barroso told Erdoğan that respect for the rule of law and indepence of the judiciary were essential for EU membership. Turkey has struggled for decades to join the bloc.

Speaking to reporters on his flight home from Brussels, Erdoğan said he discussed the Gülen Movement's conspiracy against the AK Party government with EU officials. He added they were convinced about the existence of a plot against his AK Party government. "I gave them examples and they found the developments worrying. I told them how arrest warrants were issued without checking hundreds of documents regarding the probe. The chief prosecutor reassigned the prosecutors and only then, the plot was revealed," Erdoğan said.

The prime minister said it was interesting that the probe targeted mostly businesspeople involved in tenders for Istanbul's third airport and bridge. He noted that the proposed law to amend the High Council of Judges and Prosecutors (HSYK) sought to prevent "a repeat of those errors." Still on the topic of HSYK, Erdoğan said the opposition's refusal to reconcile on the amendment has blocked a constitutional change.

Commenting on the EU's views of the HSYK amendment, Erdoğan said, "EU countries have different practices and the legislation has a duty to update the laws in line with world developments. We did not meet opposition in previous constitutional changes and it is only normal that we update the law under new circumstances."

HSYK, an independent judiciary body, played a major role in the Gülenist plot. The debate over HSYK's structure introduced a new term to Turkish politics: 'parallel state'. Erdoğan says a parallel state is composed of foreign powers aided by local affiliates seeking to overthrow the Turkish government. In the wake of the Dec. 17 operation, the AK Party government wants the Justice Minister to reign in HSYK's immense authority by tightening his control over it.

Erdoğan also lauded HSYK's decision to reassign 97 judges and prosecutors. "They could have done it before. Everybody is concerned about the process. They blackmail everyone, they blackmailed our party's deputy chairman. They wiretap phones," he said. "They add legitimacy to wiretapping by court rulings. Police chiefs do not know about wiretapping while their subordinates do it under the orders of the prosecutor. Moreover, they deliver those recordings to media outlets. We are speaking about espionage," he added.

Responding to the question of whether he had received a new letter from Gülen requesting to reconcile, Erdoğan said he had not received any letter. "I follow the news reports to find out their [the Gülen Movement's] stance. On the contrary, their policy of blackmail continues," he said.
On the question of his warm reception of the Gülen Movement in the past, Erdoğan said, "Prime Ministers should treat all members of society equally. As long as they do not commit crimes or mistakes, we embrace them, we don't designate them enemies. We have always welcomed legitimate demands of such congregations."

The Prime Minister also answered reporters' questions about Turkey-EU relations. He said 2014 might be a turning point, noting post-election changes in Germany and France, and upcoming changes in top EU posts. He added that similar progress on the Cyprus issue might be achieved if Greek Cypriot leader Nicos Anastasiades does not yield to pressure at home.