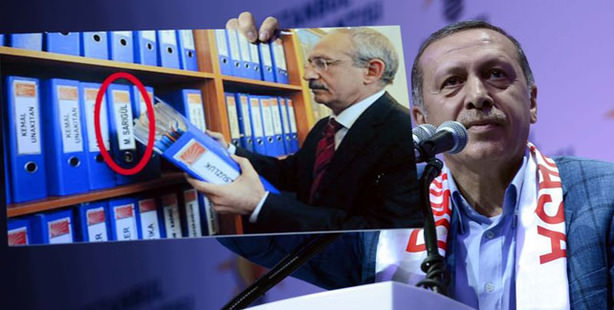 Erdoğan revealed a graft case about Mustafa Sarıgül, Istanbul candidate of the main opposition Republican People’s Party (CHP) for upcoming municipal elections. Erdoğan said CHP itself accused Sarıgül of corruption in the past and fired him.

Addressing an event to introduce his party's mayoral candidates for March elections, Erdoğan spoke about corruption allegations about Sarıgül.

Holding up a copy of report prepared by CHP in 2004 about the corruption in Şişli Municipality, Erdoğan said the report included evidence showing Sarıgül's involvement.

He claimed Şişli Municipality under Sarıgül issued building permits and turned a blind eye to illegal construction. "They cooperated with mafia and ran a scheme to cover their tracks," he said. Erdoğan noted the report by CHP board found Sarıgül and a city council member guilty of corruption and agreed on their expulsion from the party. The Turkish PM asked CHP why they nominated Sarıgül years after he was expelled. "I wonder if someone blackmailed CHP leader to nominate Sarıgül," he said. Influential cleric Fethullah Gülen supports Sarıgül's election bid according to reports in Turkish media. Gülen's followers were involved in December 17 operation to discredit the AK Party government.

Mustafa Sarıgül, media-savvy mayor of Istanbul's Şişli district since 1999, is regarded the main contender to AK Party in municipal elections for coveted seat of Istanbul mayor. Savings Deposit Insurance Fund (TMSF), Turkey's banking regulator, seized Sarıgül's assets earlier this month over an unpaid bank loan from the 1990s. Sarıgül claimed the move was an attempt by "panicked government" to derail his campaign.

Erdoğan also responded to allegations that his son and son-in-law were involved in corruption. "You are dishonored if you cannot prove it. I am confident of my son and son-in-law. They never commit such sins," he said. Also responding to allegations in the Turkish media that his wife amassed a large fortune during his tenure as Prime Minister, Erdoğan joked, "I didn't know she was that rich. I see that the media helped her to get richer."