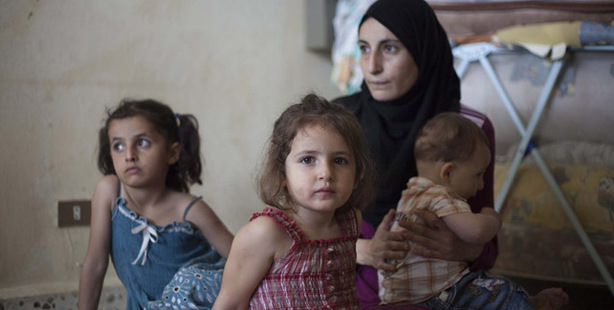 Since the Syrian civil war broke out in 2011, more than 2 million refugees have fled their homes. In 2013 alone, 1.7 million Syrians were forced to leave the country.

The UN warns that the number of the refugees is likely to increase to as many as 4.5 million by the end of this year. Syria's neighbors Turkey, Lebanon, Iraq and Jordan have taken in refugees and established refugee camps.

Close to 600,000 refugees are currently residing in Turkey, most of them in camps established by the Turkish government. That number is only for registered refugees; Turkey estimates that the real number is closer to 800,000. Lebanon and Iraq, which have weaker economies than Turkey, have also accepted refugees. There are currently 870,000 Syrian refugees in Lebanon, 215,000 in Iraq, 132,000 in Egypt and 600,000 in Jordan, despite ongoing political crises and violent conflict in some of these countries.

European Union countries have only granted refugee status to 55,000 Syrians. The UN High Commissioner for Refugees (UNHCR) demanded that EU countries accept more Syrian refugees. While the UNHCR demanded entrance for 30,000 refugees, so far 20 EU countries have agreed to accept only 18,379.

The biggest number is 11,000 from Germany, while the UK, Portugal, Greece and Italy have not made any statement on whether or not they will accept refugees. The country accepting the second most refugees is Sweden. Spain declared that it would grant asylum to 130 Syrians, while Belgium agreed to 75. Liechtenstein will accept four refugees, which is not even the entire family. The EU member state of Bulgaria has garnered attention for its poor treatment of Syrians and the terrible conditions in a refugee camp close to the Turkish border.

The UN also expressed concern over a lack of funding to provide basic services to refugees. While Turkey alone has given $2 billion, EU countries have donated $86 million. In its December report, Amnesty International called the situation an "international failure". The organization warned EU countries that 52 percent of the 2.5 million registered Syrian refugees are children, and they are struggling to survive.

According to the report, in Jordan and Lebanon refugees have added 9 percent and 19 percent respectively to those countries' populations. For this reason, Amnesty International calls on the international community to ensure adequate and sustained funding for Syrian humanitarian appeals, and to support the main host countries to keep their borders open and provide adequate protection and assistance to refugees.

Amnesty International also called for an urgent and significant increase in the number of places available for resettlement, over and above existing resettlement quotas.

UN High Commissioner for Refugees from Syria António Guterres said, "Syria has become the great tragedy of this century, a disgraceful humanitarian calamity with suffering and displacement unparalleled in recent history."