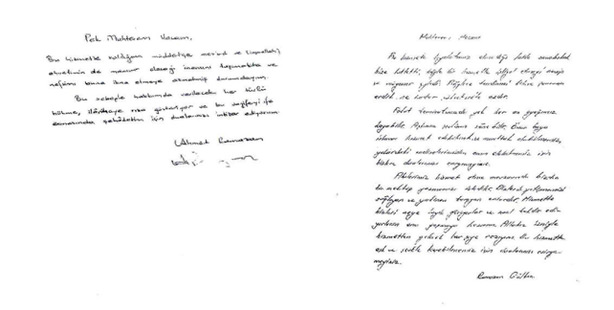 In letters written to movement leader Fethullah Gülen, devotees in key government institutions promise to use their authority for the movement.

The turmoil between Turkish Prime Minister Recep Tayyip Erdoğan and Fethullah Gülen, the leader of an influential movement with a large following, escalated after the Dec. 17 operation, a "judicial coup plot" to undermine the ruling AK Party government.

Investigations carried out in the aftermath of the Dec. 17 operation revealed the penetration of the judiciary and police by the Gülen Movement. Several audio files featuring Fethullah Gülen's telephone conversations leaked to the web, alleged testaments by numerous police officers, confidential blacklists, letters from Gülen's submissives to pledge their allegiance to him are indicative of the movement's influence within authorized bodies.

The letters of submission, written by Gülenist bureaucrats, prior to their involvement in bureaucracy are expressions of their admiration to Fethullah Gülen and their readiness to serve the Gülen Movement under any circumstance. Government officials, including district governors, lawyers, theologians and police officers signed off on their letters using wet signatures.

A current district governor stated in his letter that even his acceptance as a servant of the movement will be enough to please and render him grateful. Another governor wrote, "I would like you to know that I am ready to undertake any duty ordered by the movement." Portraying the Gülen Movement as a "timeless service", a lawyer stated that he had a complete faith in the movement and that back-tracking on the mission is not an option for him. He also noted that he would be at Gülen's disposal for at least three years.

For the last two decades, the Gülen Movement was busy building up a vast global network of NGOs, educational institutions, including private and prep schools, media outlets and companies. However, the movement's activities have remained obscure due to its leak into key political and regulatory institutions within the state. Follow-up investigations on the detainment of 16 people, including the sons of three ministers and the head of state-owned Halkbank on Dec. 17, 2013 have been leading to ties with Gülen and his movement, revealing their true motives. Hence, damaging their image in the public eye.