2014: the best year for Turkey-EU relations 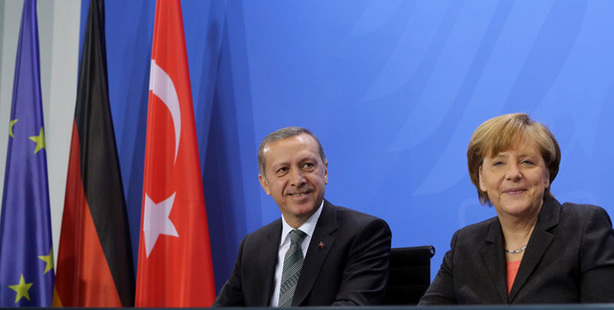 The year 2014 holds great expectations for the Turkey. During his visit to Germany yesterday, Prime Minister Erdoğan emphasized that this year will mark the year of promising progress for Turkey-EU relations

Turkish Prime Minister Recep Tayyip Erdoğan completed his crucial two day visit to Germany on Feb. 3-4 upon the invitation of German Chancellor Angela Merkel. Erdoğan's Berlin visit – following a recent trip to EU headquarters in Brussels last month, the second round of his efforts to expedite the EU accession process - served as a platform for both sides to exchange views on regional and international matters and to improve relations.

Referring to 2014 as the "year of Turkey-EU relations" during his speech at German Council on Foreign Relations – one of Germany's leading think-tanks earlier yesterday - Erdoğan stated that various international events such as the Arab Spring, Syrian issues and global economic crises demonstrated EU's need for Turkey. Turkey's growing economy, peaceful foreign politics also makes it a suitable candidate for the EU. Voicing his concern on Germany's lack of support for Turkey's EU bid, Erdoğan urged Germany to show more support while vowing that Turkey is willing to proceed with the required reforms. "We would like Germany to campaign stronger than before," said Erdoğan, further wishing that the discussion on chapters 23 and 24 relating to the judiciary and fundamental rights and justice, freedom and security to commence as soon as possible.

Germany is Turkey's biggest export market and second largest supplier, said Erdoğan and added, "German citizens rank at the top of the list of international tourists visiting Turkey each year, with about 5 million Germans coming to Turkey each year. There are more than 3 million German tourists and citizens who have relocated to Turkey and now consider it as their second homes." The prime minister further emphasized that Turkish and German nations have come closer, more now than ever and with Germany having the highest Turkish population in Europe, joint steps to be taken by both countries will have enormous significance.

Erdoğan also noted that the main obstacle in front of the economic growth of Turkey has always been terrorism, yet the AK Party government succeeded in achieving a 5 percent economic growth between 2002 and 2012. Through intensive efforts, the AK Party has also resolved the terrorism issue. The ongoing Turkish-Kurdish conflict that began in 1984 led to 40,000-100,000 mortal casualties until the recent peace talks in 2013, with no casualties in 2013.

Erdoğan touched on Syrian civil war by referring to the photos of detainees who were tortured to death. He urged the U.N. Security Council to take immediate action to prevent the humanitarian crisis in Syria.

The worst humanitarian crisis of the twenty-first century has been experienced in Syria for three year. More than 150,000 people were killed according to death toll figures and Turkey welcomed 700,000 Syrians as refugees, said the prime minister.

Erdoğan told reporters that it cost Turkey around $2 billion for providing assistance to about 700,000 refugees from Syria, but Turkey only received $130 million from the international community. He called for raising awareness about the 'refugee crisis' in Turkey.

The prime minister also noted that problems in Middle Eastern countries do not remain in that country's border as it always has a potential to spread and cause turmoil across the world.

In the joint press conference, Erdoğan echoed his sentiments that Assad should not have been a part of transitional government to be established while upholding a democratic Syria.

Erdoğan also made remarks on Turkey's central banks' attempts to stave off the recent devaluation of Turkish lira by hiking the interest rate. He reiterated that the central bank was an independent institution and he had no authority over their decisions. He pointed out that the government still has alternative plans to boost the Turkish lira.

Erdoğan and Merkel also held talks on plans to support the projects and events of newly-formed joint Turkish-German University in Istanbul.

Erdoğan also thanked German government, deciding to extend deployment of the Patriot missiles in Turkey as part of a NATO mission to protect the country against possible threats from neighboring Syria.

Speaking on Syria, Merkel said: "Turkey hosts 700,000 Syrians. We appreciate it. The situation in Syria is unacceptable and the international community should take steps to make a change. Geneva-II did not yield the desired results."

She said Germany was in communication with Russia, "a key actor" in Syria. "I agree with Mr. Erdoğan on Syria. We need to take action to stop barrel bombs," Merkel said, adding that Russia, Iran and China should take steps to that extent.