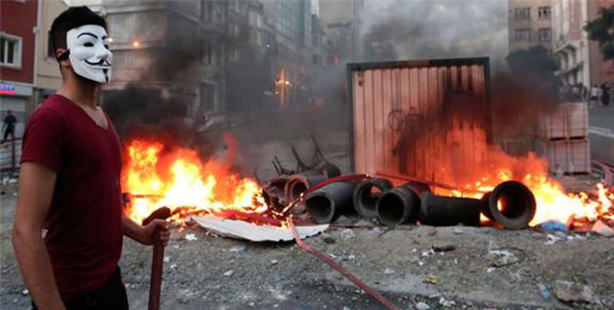 New details of the indictment against 26 leaders of the Gezi Park protests that accused defendants of running a criminal organization emerged. The indictment claims organizers paid people to throw stones at police and spread propaganda to defame police in handling the protests.

Members of Taksim Solidarity Platform, which organized the protests that escalated into anti-government riots, will appear before the court if judges approve the indictment. The prosecutor's office asked the court to sentence defendants to prison terms up to 29 years. Among charges in the indictment is "running a criminal organization," "violation of law on demonstration and rallies" (staging a rally unauthorized by police) and several other charges.

The investigation against demonstrators started July 8, 2013, about one month after the protests started. Among the plaintiffs are ruling AK Party's Istanbul branch and a man who claims his son was paid by protest organizers to attack the police.


The prosecutor in the indictment says Taksim Solidarity Platform's calls for protest "endangered public order and security." According to indictment, protesters hurled stones and bottles at police, burned police cars and damaged private and public properties.

An excerpt from the indictment stated protests against redevelopment of Gezi Park "which started out peacefully, gradually paved the way for provocation by extremist and terrorist groups." Protesters are accused of spreading false stories, claiming police used live bullets, police vehicles crushed protesters to death and reports that protesters' deaths were covered up. The indictment stated "slingshots and glass balls" were found in possession of suspects. The prosecutor also said some suspects damaged a car belonging to AK Party. Muhittin Akat, one of the plaintiffs, claimed Taksim Solidarity Platform members paid an undisclosed sum to his son to throw stones at policemen dispersing the protesters.