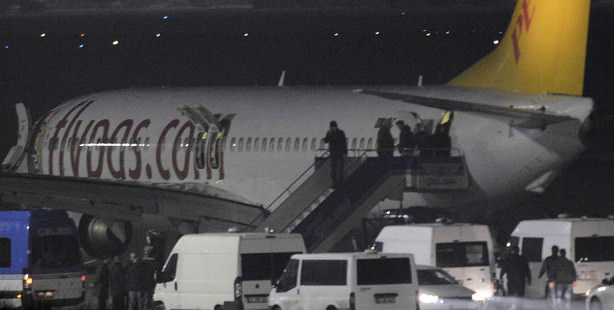 A failed attempt to hijack a jet on course to Istanbul fails. An intoxicated passenger delivers a bomb threat and orders the pilot to fly to Sochi.

Artem Hozlov, a 45 year old Ukrainian man, made multiple bomb threats after the plane took off from Ukraine en route to Turkey. Turkish F-16 fighter jets immediately took off to escort the plane.
The hijacker was deceived by crew members into thinking the plane landed in Sochi, Russia, as he had demanded. The pilot announced they had landed in Sochi, when in reality they were in Istanbul. The pilots dimmed the cabin lights to further fool the man into thinking they had landed in Sochi, where the Olympics just began.
The intoxicated man did not realize for some time there actual destination. This gave crucial time for Turkish special security forces to infiltrate and take custody of the man.
It appears no one was injured during the failed hijacking attempt. The hijacker himself suffered minor injuries during the seizure of the plane.
The motives of the man are currently not clear. The man is now in question by Turkish authorities, who are investigating possible ties with terrorist organizations.
Last Update: Feb 08, 2014 3:58 pm
RELATED TOPICS