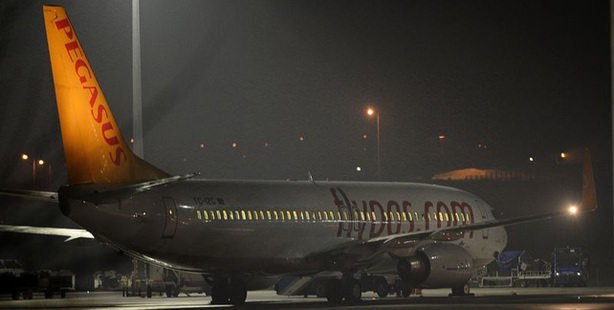 Artem Kozlov, the Ukrainian man who attempted to hijack a Kharkiv-Istanbul plane, claimed he acted alone and sought to demand the release of his friends in Ukrainian prisons. The suspect faces up to fifteen years in prison for hijacking attempt.

Kozlov boarded an Istanbul-bound Pegasus Airlines plane from Ukraine's Kharkiv on Friday night. Claiming he had a bomb, he asked the crew to divert the plane to Sochi, the Russian city in which the Winter Olympics is being held. He attempted to enter the cockpit. Flight attendants contacting the pilots told Kozlov the plane would turn to Sochi. After flying to the direction of Sochi for a short time, pilots turned to Istanbul as flight attendants calmed the man, who was reportedly drunk. The hijacker claimed he planted the bomb in cargo section of the plane and waved his cellphone, saying "I will blow it up by my cellphone."

The plane entered Turkish airspace in the company of Turkish warplanes and landed at Sabiha Gökçen Airport, its original destination. As Russian-speaking negotiators from Turkish police tricked the hijacker that he made plane landing in Sochi, a police squad searched the cargo for a possible bomb. After four hours of negotiations and evaucation of passengers aboard, a counter-terrorism squad entered the plane and asked Kozlov to surrender. Kozlov first refused to surrender and after a brief altercation overpowered.

In his first statement to police, Kozlov said he tried to hijack the plane to demand the release of his friends arrested during anti-government demonstrations in Ukraine. He said he acted alone and was not member of any organization. On why he chose the Turkish plane, he said he boarded the first flight he could book at the airport. Police's inquiry found Kozlov vacationed in Turkey's Antalya six months ago for fifteen days.

Giving an account of hijacking attempt, Mesut Koç who was one seat behind Kozlov, said, "He stood up and said 'I have bomb.' He said he wanted to go to Olympics venue in Sochi. He tried to enter the cockpit but people stopped him. He was intoxicated. He couldn't stand straight."

Mehmet Tutar, one of the passengers, said he first thought someone fell ill. "The flight attendants were very calm," he said.

Under Turkish laws, Kozlov faces five to 10 years in prison for hijacking and one to five years for deprivation of physical liberty.