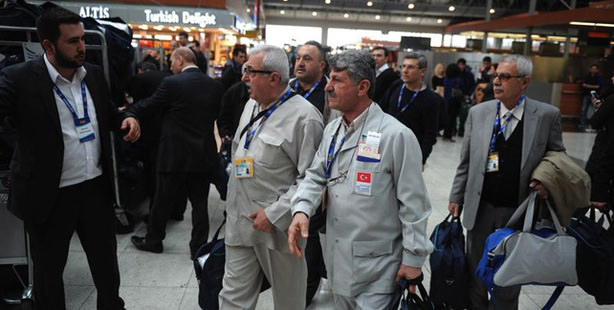 A hundred dedes, leaders of the Alevi sect in Turkey left for holy Muslim cities in a trip sponsored by government.

In the first trip of its kind, the religious leaders of the Alevi sect in Turkey, departed for Najaf and Karbala in Iraq. From Iraq, they will travel to Saudi Arabia to perform umrah. The trip is sponsored by the Ministry of Culture and Tourism and the Association of Turkish Travel Agencies (TÜRSAB).

Speaking at the airport, Celal Özer, one of dedes, said, "Since my childhood, I always desired to visit the holy lands. I personally thank the government and TÜRSAB for this project. Hopefully, all our Alevi brothers will have this chance to visit the holy places in the future."

TÜRSAB President Başaran Ulusoy said dedes' trip sponsored by the Ministry was a contribution to country's unity. "This is a landmark trip. We plan another one for May," he said.

The group will first visit Najaf, the burial site of Ali, the fourth caliph. The group will then go to Karbala, the site where his son, Hussein Ibn Ali, was martyred. Both Ali and Hussein are key figures in Shiism. The trip will conclude with an umrah pilgrimage in Saudi Arabia.

The project is regarded by government as a step toward reconciliation between the Sunni and Alevi communities.

Turkey's longstanding Alevi turmoil erupted in 1937 and 1938 in the Dersim region, today's Tunceli province in Turkey. The Turkish military took action to quell an Alevi uprising with aerial bombings and poison gas, killing 13,806 people and displacing scores. The Alevis had revolted following Turkey's 1934 Resettlement Law, which aimed to assimilate the ethnic minorities through forced resettlement.

Turkey's Prime Minister Recep Tayyip Erdoğan apologized in November 2011 for the Dersim incident, which he described as one of the most painful and bloody incidents in Turkey's recent history.

In the years since the Dersim tragedy, Alevi activists have demanded to be classified as a religious minority, which would grant the group official recognition and tax exemption for their houses of worship, implement elective courses on the Alevi faith in public schools, and ensure greater emphasis on non-discrimination.

An upcoming democratization package to be introduced by the AK Party includes provisions to address some of the concerns of the Alevi community was met with cautious support from various Alevi organizations. The reform package is expected to reach parliament floor on this month ahead of the local elections to be held in March.