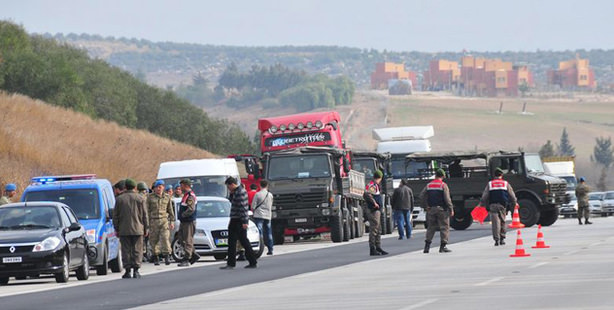 Carried out against the MİT's trucks by gendarmerie forces, the Jan 19 operation had the characteristics of coup d'état because of its secret nature, as potential evidence was destroyed by senior officials to prevent it from being leaked

According to a warning notice sent by a military official about the raid against the Turkish National Intelligence Agency's (MİT) truck, the preparations for the operation were conducted in a way that resembled a coup d'état and the lower level officials were used as pawns.

On Jan. 19, the trucks of Turkey's National Intelligence Agency in Adana were raided by gendarmerie forces. The official who sent the notice stated that he felt guilty about what has happened and wanted to inform the ministry about the misconduct. He noted lower level officials were not informed about the details of the operation but five gendarmerie were called to carry out the procedures. Most importantly, he noted the instructions came from the company commanders.

According to the notice, Adana Gendarmerie Regional Command Brigadier General Hamza Celepoğlu ordered the operations, despite denials though his lawyer. Two investigations carried out by the Adana Chief Public Prosecutor's office revealed that on the day of the operation, company commanders called public security and intelligence personnel under their command and ordered them to immediately come for a meeting. The military personnel gathered and were transferred to the scene, which proved that "meeting" was a coverup for the operation.

Bomb squads and the narcotics, anti-smuggling, organized crimes unit, crime scene investigation and nuclear alarm units were present at the operation scene. The Regiment Commander, intelligence officers, the district gendarmerie commanders of Seyhan, Yüreğir and Sarıçam, along with master-sergeants of Public Order Intelligence Departments were all involved in the operation and any kind of information was not leaked to lower level personnel.

The military official who sent the warning notice also stated that the commander called lower level officials to the barracks to have a meeting on their day off, making a fool out of them. Their phones were unlawfully collected on their way back from the operation for inspection purposes. Inspectors were sent away to conceal the misconduct, said the source. "The truth will be revealed if the operation is investigated and testimony of district personnel is taken," he said.

The warning notice sent as an email by the military official was processed immediately by Adana Chief Public Prosecutor's office and will be used as evidence for inquiry no. 2014/17.

According to judicial networks, the call that sparked the raid originated from Ankara and claimed the trucks were filled with explosives, arms, munitions and also mentioned affiliation with al-Qaeda.

The operation was planned as part of the Gülen Movement's efforts to overthrow the government of Turkey.