Taliban tops of agenda at the Trilateral Summit 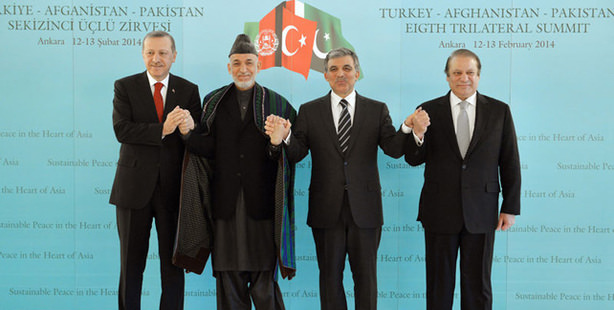 Turkish President Abdullah Gül stated that a pact has been made between countries and related government agencies, and labelled the meetings as the most successful since the first Summit in 2007. Referring to Afghanistan and Pakistan as Turkey's allies, Gül noted that 2014 will be a significant year for Afghanistan with the presidential elections and the withdrawal operation of the NATO-led International Security Assistance Force (ISAF) planned to be completed at year's end. "With the support of the international community, Afghanistan will finally enter into a time of peace and success," said Gül.

The Afghanistan President Hamid Karzai and Pakistan Prime Minister Muhammad Nawaz Şerif arrived in Ankara on Wednesday to hold high delegation meetings in Ankara focusing on economic cooperation, security and inter-parliamentary cooperation, but with the threat of Taliban in the region headlining the discussions.

Afghan Foreign Minister Ahmet Osmani, who arrived with Barzani along with other top-ranking Afghan officials including Defense Minister Bismellah Mohammadi and High Peace Council Chief Salahuddin Rabbani, stated that negotiations were started with the Taliban regime to establish peace, in response to a question raised by Anadolu Agency correspondent. The strategic partnership agreement signed between U.S. and Afghanistan is an important step towards establishing peace, said Osmani. He added that the Taliban regime is mostly under the control of Pakistan. Recollecting that few Taliban militants have surrendered, Osmani said, "The negotiations are going well, but it is too early to say how good." He further noted that foreign intelligence agencies should withdraw from regions ruled by the Taliban regime and not get involved with the peace talks.

Afghan National Defense Minister and Pakistan's Commander of Land Forces General Raheel Sharif also paid an official visit to the Turkish Chief of Defense, according to the press statement of the Turkish General Staff.

Main issue remains to be the Taliban regime

The trilateral summit process was launched by Turkey between Afghanistan and Pakistan in 2007 following an official visit by then Turkey's Foreign Minister Abdullah Gül to Islamabad. The summit process according to Gül aims "to bring security and stability to the region." The three countries agreed on increasing coordination between their political, military and intelligence forces for fighting terrorism and militant activities. In 2009, President Karzai visited Turkey to obtain affirmation that Turkey will take an active part in stabilizing the region.

While the assassination of Afghan Chief Peace Negotiator Burhanuddin Rabbani by the Taliban created mistrust between Afghanistan and Pakistan, the summit process is still efficient. Three agreements have been signed, including one on joint military training. The last summit was held on Dec. 2012 in Ankara.