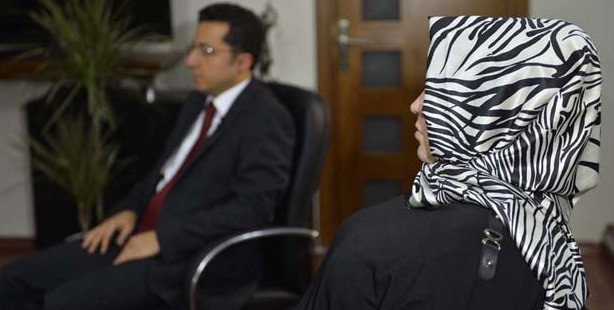 She and her six-month-old baby were assaulted and now the media is attempting to whitewash the incident to sway public opinion, said Zehra Develioğlu, the hijabi woman attacked in June 2013 during the Gezi Park Protest

After the last May's Gezi Park protest against the redevelopment of Istanbul's Gezi Park, Develioğlu was attacked by an anti-government mob. She filed a criminal complaint with a forensic report on the attack, which was carried out in Kabataş.

Develioğlu said those who do not want to believe her will not believe anyway even if the attack was recorded by a holy camera from above.

She referred to international human rights law and said it was a heavy burden for her to feel compelled to convince people that the attack was genuine.

According to the norms of international human rights laws, the injured party's verbal declaration regarding the incident is sufficient and the victim is not obliged to prove allegations with evidence.

"The process had such slanderous degree in news outlets, which introduced the attack as if a woman, who walking with her child, had not been assaulted" said Develioğlu, referring to the Turkish newspapers Zaman, Hürriyet and Taraf, which purported black propaganda against her.

Zaman, a daily closely-linked to the Gülen Movement, said the released footage proved that the allegations regarding the incident were completely unfounded.

Hürriyet too claimed that there was no attack against Develioğlu according to the released footage. A journalist at the newspaper, Ertuğrul Özkök, made harsh remarks on the attack and said the attack was just a slanderous rumor and those who spread that rumor deserved the spit on their faces.

Taraf headlined "Two terrible lie are over" and used Develioğlu as a medium to attack Erdoğan.

Develioğlu's lawyer Abdurrahman Karapınar said the discourse in the media on the footage and the deliberate distortion of the facts made evident the operation over the public perception.

Karapınar, however, did acknowledge the footage is blurry but said that does not disprove his client's claims.

Journalist Abdulkadir Selvi of Yeni Şafak interviewed Zehra Develioğlu after the footage was released and said asking a woman to prove that she was attacked can only be considered as another assault against her.

He said that kind of footage was just an ancillary evidence in the investigations and it is not in and of itself sufficient to make a verdict.

Referring to the military memorandum of Feb. 28, when the ban on headscarf significantly tightened in Turkey, Karapınar said the same kind of operation over the public perception is still carried out as women are used as a medium to tarnish the government's unifying image.

He also accused Gülenist media outlets in Turkey of discrediting the country's image by claiming the prime minister used that attack to polarize the country. He also said the discourse of Gülenist media was an indicator of their involvement in Gezi Park protests of last May.

Speaking to Sabah newspaper, an anonymous police officer said there is another video footage displaying the scene more clearly than that released.

Sabah reported that prosecutor Rasim Işıkaltın also said the video footage released by certain media outlets was before the attack.

According to the forensic report compiled by Istanbul Forensic Medicine Institute, four bruises on Develioğlu's right knee and one bruise on her left knee were found. Her six-month-old baby had three scratches on her body.