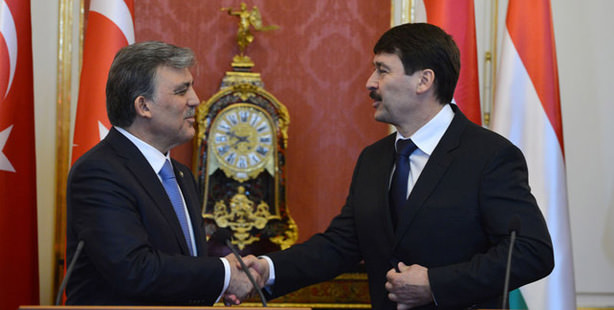 by Feb 17, 2014 12:00 am
Turkey's President Abdullah Gül yesterday paid an official visit to Hungary as a guest of Hungary's President Janos Ader. The two leaders held a joint press conference following a tête-à-tête and inter-delegation meetings in Budapest.

During the joint press conference, Ader said Turkey is one of the safest routes in regards to energy sources and pipelines, especially compared to the Caucasian and Middle Eastern routes.

Ader echoed his sentiments by saying that Hungary is one of the members of Friends of Turkey group in European Parliament and will continue to resolutely support Turkey on its bid for EU accession in this regard.

Gül touched on the High Strategic Cooperation Council, which was established to boost bilateral ties between two countries. He further expressed his wishes to increase the countries' trade volume to $5 billion and said that the two agreed to increase investments in the countries.

A business forum is expected to be held in Hungary during Gül's official visit.