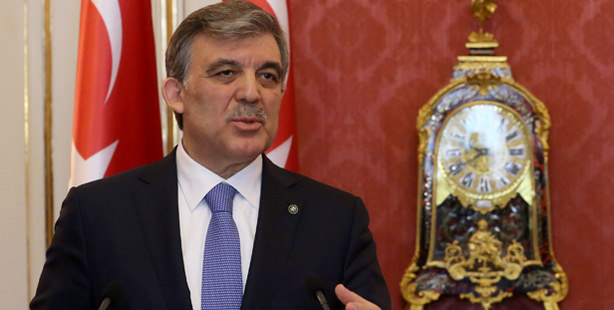 President Gül says the serious threat posed by the Gülen Movement, which acted as a 'parallel state' to topple the government, can not be tolerated

In a press statement ahead of his official visit to Budapest, President Abdullah Gül said governments are supposed to fight against 'parallel state' and hinted at his stance on the Internet bill awaiting his ratification, as well as the law to restructure Turkey's highest judicial body.

Answering questions about a parallel political structure operating in Turkey, Gül said those working in government institutions are entitled to their personal, religious, ideological and political views and can express them in certain non-governmental spaces; but when it comes to their government service, loyalty must lie with the constitution and their superiors. Nothing else.

"Let me be clear, no state in the world would permit otherwise," the president said, stressing that those who want to criticize the government's shortcomings should do so within a democratic framework. It is unacceptable for notable government officials to exploit their positions of authority to spark anti-government campaigns, and they will face legal repercussions, he continued.

A recent wiretapping scandal has topped Turkey's political agenda, with Prime Minister Erdoğan claiming that the president was also wiretapped. His statement created an atmosphere of unrest, and in response President Gül confirmed that while there are serious security precautions in his office, the incident could have occured outside. He noted there should be law enforcement to prevent such immoral acts.

The problem with the Internet is that it is difficult to track down offenders; governments have to create regulations to prevent crimes, while at the same time preserving freedoms. President Gül admitted there were a few issues with the new Internet law but said they were being resolved. He also noted how people have ignored the positive aspects of the bill.

Commenting on another proposed law to restructure the Supreme Board of Judges and Prosecutors (HSYK), President Gül said the committee will begin work on the new laws as soon as they are transferred to the Grand National Assembly (TBMM). He also emphasized the importance of working in cooperation with legal bodies when challenging proposed laws. In the case of the HSYK law, the president said "there were 15 subjects that required attention, so we made the necessary suggestions," adding that as the president, he can only present his objections and suggestions but cannot act as the Constitutional Court.

Regarding the recently published footage of Zehra Develioğlu, a woman who claims to have been attacked by Gezi Park protestors in Kabataş on June 1, President Gül said he knows her father-in-law well. Mr. Develioğlu previously expressed that it would be wrong and unethical to blame all protestors for the attack, in the same way that it would be wrong to disprove his daughter-in-law's claims because she had been traumatized by the incident. Gül reaffirmed these sentiments, stating he is on the same page and deems it unfortunate that some people have brought up the issue again when the incident was extremely traumatic, even it it did take place some time ago.