Feb 28 coup probe to include civilians 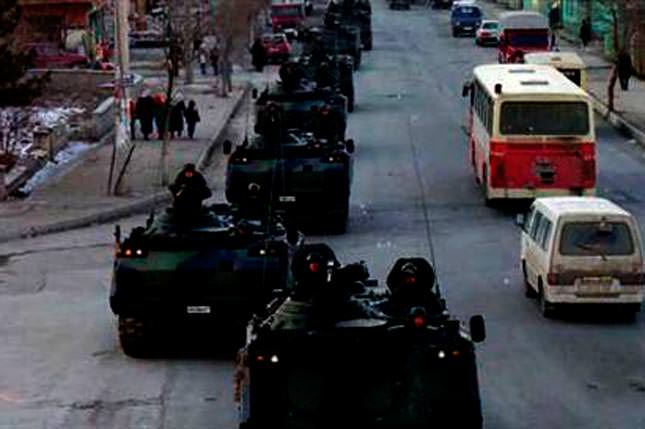 The trial on the Feb. 28, 1997 "soft coup" that forced the resignation of former Prime Minister Necmettin Erbakan and created political chaos could be broadened to include civilians who assisted the military officers that actually executed it.

Trial on Turkey's most recent coup continues as Feb.28 will mark the 17th anniversary of "postmodern" coup. With defendants, all of them former generals and military officers, released on probation in previous hearings, the coup victims cling their hopes on investigation of civilian assistance to the coup.

Prosecutors recently expanded the probe on Feb. 28, 1997 coup to civilians accused of helping the coup including senior bureaucrats, academics and journalists. The next hearing will be held on Mar. 10.
In previous hearings, defendants, who included retired generals Çetin Dogan, Çevik Bir, Erol Özkasnak, Idris Koralp and Kenan Deniz were released on probation.

Prime Minister Recep Tayyip Erdogan assured critics of the trial that investigation into the coup will cover nongovernmental organization, media and businesses which helped the coup leaders in their campaign against conservatives.
According to reports in the Turkish media, Chief Prosecutor's Office in Ankara assigned three prosecutors to investigate the civilian involvement in the coup. The indictment on civilian accomplices of the coup is expected to presented to the court in the coming weeks. Reports on various Turkish dailies claim the indictment focused on civilians, from labor union members to academics, judiciary members, media executives and journalists.

After Welfare Party (RP) won the 1995 general elections, concerns raised among Turkey's secular elite. The party, founded by the late Necmettin Erbakan, was associated with political Islam by its critics. Although it did not openly promote shariah or Islamic law, secular circles in Turkey considered RP and its grassroots movement Milli Görüs (National Vision) a reactionary movement that sought to bring the country under religious law.

RP formed a coalition government with right-wing True Path Party (DYP) and Necmettin Erbakan was elected Prime Minister. A rift emerged between the Erbakan government and Turkey's secular elite in the army, judiciary and other circles.
Through harsh statements, top generals, Supreme Court officials and other "defenders" of secularism warned the government against Islamist tendencies, despite the RP declaring no such intentions. Even Erbakan's visits to Iran and Libya were criticized. The government's embrace of religious circles was lambasted by defenders of secularism who held key posts in the army.

Through blacklisting practices, people with conservative views such as women wearing headscarfs or men performing prayers were expelled from public institutions. The status of imam-hatip schools, middle and high schools with a concentration in religion, was downgraded and students at such schools were prevented from attending universities by the imposition of the requirement of higher grades for university exams. The process eventually led to Erbakan's resignation from office in June 1997.