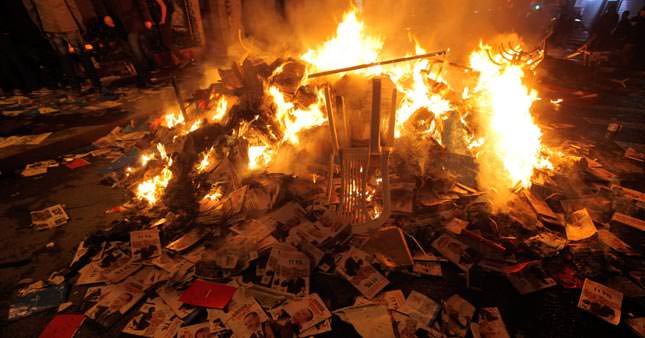 ISTANBUL – Protests over the death of Berkin Elvan, 15, paved the way for radical groups bent on violence to take to the streets on Tuesday and Wednesday. Attempting to incite chaos in scenes resembling Gezi Park protests, DHKP-C, a terrorist organization, launched attacks on riot police, civilians, shops, banks and AK Party offices. Burak Can Karamanoğlu, a 22-year-old, was killed by DHKP- C as he merely passed by a violent crowd of demonstrators. Two others were injured in the incident. Following the death of Berkin Elvan on Tuesday after 269 days in a coma, riots erupted across Turkey. Protesters took to the streets, blaming police for Elvan's death after he sustained injuries from a stray tear gas canister in June 2013. Istanbul, Ankara, İzmir and other big cities witnessed violent confrontations.

DHKP-C, a radical group, is designated a terrorist organization in Turkey. The group is responsible for carrying out various attacks in the country, including last year's rocket attack on AK Party headquarters and a suicide bombing incident at the U.S. embassy in Ankara. The United States and European Union also recognize the DHKP-C as a terrorist group.

The situation worsened following Elvan's funeral in the Okmeydanı district of Istanbul on Wednesday. Resisting efforts by riot police to disperse unauthorized rallies, demonstrators engaged in clashes with security forces. Okmeydanı became a hotspot of tense protests as angry crowds attacked the AK Party's campaign offices for upcoming local elections. Pillaging election posters and other materials in the office, protesters burnt them on the street to prevent riot police reaching them.

Around 10:00 p.m. local time, a group of protesters gathered outside Elvan's home and engaged in a quarrel with a group of locals who complained about the riots. Soon after, gunshots rang out on the street. Police officers and paramedics rushed to the scene and found Burak Can Karamanoğlu, 22, shot in the head and two others shot in the stomach and hand.

Karamanoğlu was immediately hospitalized but subsequently died from his head injury. The Istanbul Governor's Office said in a written statement that Karamanoğlu died during a fight between two groups of youths.

Initial media reports claimed Karamanoğlu was a member of the ultranationalist group Ülkü Ocakları (Idealists' Club) but the movement denied the claim. Later it was revealed that Karamanoğlu was merely a resident angered by the riots. Karamanoğlu, the son of a family of five, will be buried in his hometown Giresun in northern Turkey later this week. It was claimed that Karamanoğlu was a card-carrying member of the AK Party but has not yet been confirmed. Hours after the incident, DHKP/C, in a statement published on an affiliated website, claimed responsibility for the attack.

Prime Minister Recep Tayyip Erdoğan condemned the attacks on his party's campaign offices. "Some marginal leftist groups such as the DHKP-C are attempting to provoke trouble on the streets in the run-up to the elections and some media groups and businessmen contribute to these provocations by the DHKP-C in Turkey," Erdoğan said. "They claim to be proponents of people's freedom. They lie. They only want to spread chaos ahead of the elections. They are not democrats. They know how the elections will turn out so they want to derail the election," he added.

Erdoğan also accused controversial imam Fethullah Gülen of provoking unrest in Turkey with a condolence message for Berkin Elvan.
Deputy Prime Minister Bülent Arınç said Karamanoğlu's death was "as tragic as Berkin Elvan's death." "But there were some groups who forgot that they were mourning Berkin and took to burning, vandalizing and destroying. They are few in number but are well-organized and aim to terrorize people," he said.

DHKP-C's involvement in the latest incidents and confrontations with locals raised concerns that protests may fuel tensions between the Sunni and Alevi communities as Berkin Elvan was a member of the latter group. Suspicions of a plot were raised over Karamanoğlu's death as social media accounts and blogs linked to farleft groups lauded the killing as "a retaliation against Elvan's death."

The prosecutor's office launched an investigation into the killing of Karamanoğlu. It suspects the shooting aimed to stir provocation, to pit locals against Elvan supporters. A group converged outside Karamanoğlu's home, chanting "Burak Can is immortal," echoing a similar slogan used in protests over Berkin Elvan's death.

The police prevented the crowd from marching on the street. Burak Can's father, Halil Karamanoğlu, gave an account of the incident: "I wasn't at home. My wife told me later that he [Karamanoğlu] left home to hang out with his friends. She warned him not to go out because of the protests but he ignored her. We live near the scene of yesterday's riots. I heard that my son was walking with his two friends when a crowd approached them. It all ended in ten minutes as far as I know and my son was shot," he said.

The father denied media reports that his son was carrying a stick. "He and his friends were wondering what was happening on the streets.
There weren't any streetlights on at the time of his shooting. His friend told me that they heard a gunshot and Burak Can fell and hit his head on the ground. He died for nothing," the grieving father said. He claimed that the other two people injured in the shooting were not the two friends his son was with.

Halil Karamanoğlu condemned protests following Berkin Elvan's death. "They exploit it to bring chaos to Turkey. They burnt shops here in Okmeydanı. It is a shame. I only want people to come to their senses and end the violence. This nation is united and we should not allow it to be divided. We, Turks, own this country and we can't allow others to sow discord here," he said.

Karamanoğlu called on the public to refrain from resorting to violence in response to his son's death.

Dursun Eker, a friend of the family, claimed Burak Can and others were only bystanders and did not attack the protesters.