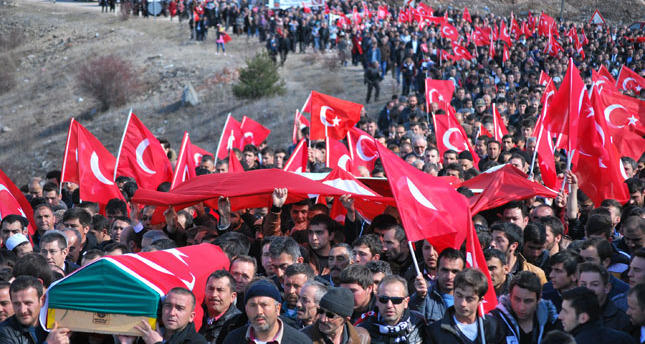 by AA Mar 15, 2014 12:00 am
GIRESUN – A funeral was held yesterday for Burak Can Karamanoğlu, who was killed by militants during protests over death of a Gezi Park protester. A large crowd attended the funeral in Alucra, Karamanoğlu's hometown in northern Turkey. A convoy of more than 100 vehicles accompanied the truck carrying his casket as it arrived in the town. The coffin, draped in the Turkish flag, was brought to the family's house where tearful family and relatives embraced it and paid their respects.

Funeral prayers were performed at a mosque in the town and officials from the AK Party and local administrators were in attendence.

Hundreds of people carried the coffin to the burial site as some in the crowd shouted "Martyrs are immortal." Alucra, a small town of 9,000 people, was adorned with Turkish flags, banners praising Karamanoğlu and pictures of the young man. Karamanoğlu was walking on the street with his friends in Istanbul's Okmeydanı district late Wednesday when gunmen opened fire on them. He was killed and two others were injured in the incident.

Members of the Revolutionary People's Liberation Party/Front (DHKP-C) claimed responsibility for the attack. Riots broke out earlier this week in Istanbul and other cities following the death of a Gezi Park protester who was hit in the head by a teargas canister during crackdown on protests last year and lapsed into a coma. DHKP-C affiliates took to the streets and torched parties' campaign offices, banks and stores in ensuing riots.