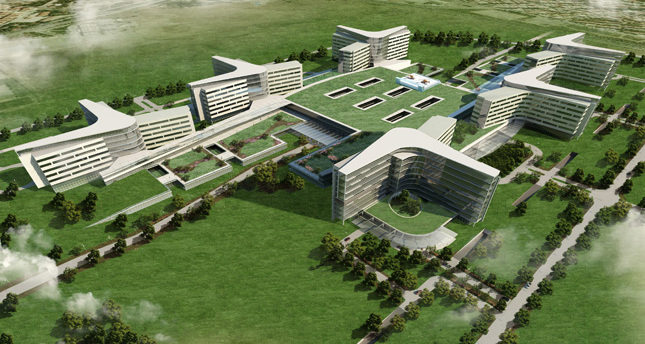 The government's latest healthcare reforms have led to the construction of new hospitals in 14 cities, which bring together a range of medical specialties under one roof

ISTANBUL – Turkey continues to reform long-neglected healthcare services through new projects. City hospitals, sizable hospital complexes, are part of the reforms to improve health services and serve more patients. City hospitals, mainly built in suburbs, aim to improve health standards by increasing hospital bed capacity and addressing the shortage of doctors.
These large hospital complexes will provide services in a diverse range of medical specialties not available in a single hospital. To ensure the quality of services, a public-private partnership model was adopted in the construction and operation of the complexes.

City hospitals will be leased to private companies, and the government will only pay fees for medical imaging, laboratories, security, maintenance and the salaries of healthcare workers.

The most recent city hospital construction started in Istanbul's İkitelli district in February. One of the biggest in Istanbul - with a bed capacity of 2,682 - the complex consists of eight hospitals concentrating on different medical specialties.

Located on Istanbul's European side, the complex will be completed in three years. It will be built on an area of 1.5 million square meters. The latest technology in construction infrastructure will be used in the project, which will also have eco-friendly features. It will have about 100 surgery rooms and clinics. A research and development compound will also be located in the complex.

In the capital Ankara, two city hospital complexes will be built in the neighborhoods of Etlik and Bilkent. Construction of the complex in Etlik which is being built on an area of 1.4 million square meters is scheduled to finish in 30 months.

The city hospitals are inspired by similar projects in European countries. In 2013, a total of TL 15.7 billion contracts were awarded to companies for constructing hospitals.

The complexes, along with all the services a regular hospital offers, will also house stores and hotels where relatives of patients can shop and stay.

The government is considering building 15 such complexes in 14 cities all across the country with large bed capacities. Total bed capacity of hospitals will be 24,405.

Healthcare in Turkey, for decades, remained in a state of negligence. Patients had to wait in long queues for a simple medical examination at understaffed, ill-equipped hospitals. The scarcity of hospitals in areas with large populations used to force patients to travel long distances for treatment.

Impoverished patients used to be unable to be discharged from hospitals until they had paid for treatment or surgery expenses.
In recent years, Turkey has taken steps to ameliorate the crumbling healthcare system.

Hospitals run by the Ministry of Health and Social Security Fund (SGK), formerly known as the Social Insurance Fund, were merged to prevent overcrowding in the latter. The government also cut red tape in the treatment of patients with social security at teaching hospitals. Existing hospitals were modernized, and over 500 new hospitals opened all across Turkey.