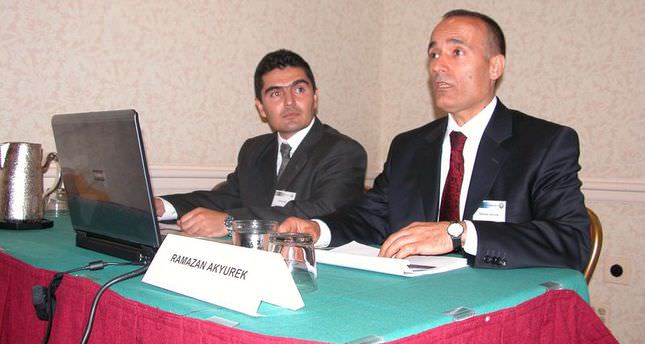 by daily sabah Mar 17, 2014 12:00 am
ISTANBUL – Ramazan Akyürek, former director of the Turkish police's intelligence department, was suspended after an investigation found him involved in leaking and destroying confidential documents. Akyürek was linked to the Gülen Movement and previously accused of a cover-up in the murder of a Turkish-Armenian journalist.

Turkish police have launched an internal investigation into the alleged wrongdoings of Akyürek. Late Sunday, police officers delivered a suspension order to Akyürek at his home and confiscated his badge and gun.

According to the findings of the investigation, during his tenure as head of intelligence, Akyürek erased information, allegedly related to the 2007 murder of Turkish-Armenian journalist Hrant Dink, from intelligence department computers.

The Interior Ministry has sought Akyürek's dismissal, claiming he tarnished the image and credibility of the police department over his alleged negligence in the Dink murder.

Akyürek, who served as the head of intelligence department between May 2006 and October 2009, was removed from duty and reassigned as a chief police inspector. He was then reassigned as head of the police's Inspection Board.

Finally, he was suspended from this duty in October 2013.

He was appointed as an expert to the police's Department of Strategy Development. Finally, amid a major reshuffle in Turkish law enforcement in the wake of the Dec. 17 operation, targeting the government, he was removed from duty.

Akyürek filed an objection to the suspension, and a court ruled for his reinstatement.

He is regarded as one of "police imams" of the Gülen Movement, an infiltrator in the police carrying out the orders of the movement led by controversial imam Fethullah Gülen.

The movement is accused of running "a parallel state" within Turkey's government.

His shady past made the headlines after he was assigned as intelligence director. Media reports claim Akyürek, appointed as police chief of the Black Sea province of Trabzon in 2004, was involved in wrongdoings and cover-ups during his term. Akyürek allegedly hired Erhan Tuncel, a suspect in the bombing of a McDonald's restaurant in Trabzon in 2004, as a police informant. Tuncel was later tried for aiding and abetting the murder suspect in the Hrant Dink murder. Tuncel claimed that he warned local police in Trabzon about an assassination plot against Dink. Akyürek, according to Turkish media outlets, also sought to incite ethnic tensions in the city.

In 2005, thousands of people attempted to lynch members of a nongovernmental organization advocating rights of imprisoned members of the terrorist organization the Kurdistan Workers' Party (PKK). In 2006, a coffeehouse frequented by Kurdish workers was torched in the city, and a week after this incident, a bomb was found in local offices of a nationalist party. In the same year, a 16-year-old secondary school student shot a Catholic priest dead in the city. Catholic priest Andrea Santoro was under police protection due to threats at the time of his murder.

Akyürek was head of intelligence when prominent journalist Dink was killed on Jan. 19, 2007, in Istanbul despite 17 tip-offs about an assassination attempt against Dink.

Nedim Şener, a noted journalist, wrote a book about the murder and detailed Akyürek and other police officers' misconduct in Dink's murder as well as Akyürek's ties with the Gülen Movement. Şener was kept in pretrial detention for over a year on charges of involvement in a coup plot and released in 2012.