Nation hopes for a leap toward peace on Nevruz 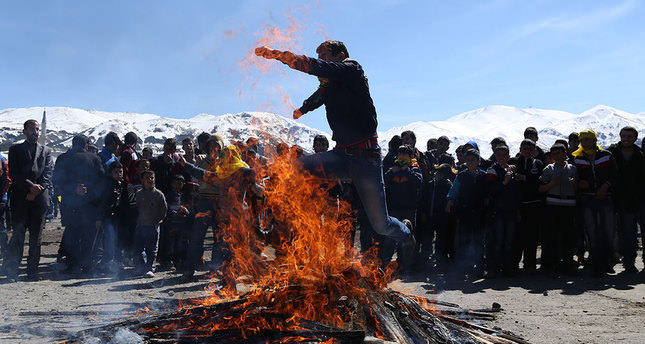 With the government committed to end decades long strife in the east, the nation welcomes another Nevruz, celebrated throughout the region as the coming of the spring

ANKARA – The reconciliation process, which is the latest attempt to tackle Turkey's age-old Kurdish question, began in early 2013 with a ceasefire between the Turkish government and the outlawed Kurdistan Workers' Party (PKK). AK Party governments had made previous attempts, such as the Oslo Process and the Kurdish Opening, and it seems both the Turkish and Kurdish sides had learned from previous efforts; thus, the reconciliation process has given rise to more hope than ever. Abdullah Öcalan, jailed leader of the PKK, made a statement during last year's Nevruz celebrations in Diyarbakır. "We have now reached a point where guns must go silent, and ideas and politics must speak. We will unite in the face of those who try to split us. From now on, a new period begins when politics, not guns, will come to the fore," Öcalan stated in a letter last Nevruz.

Öcalan's letter was one of the important steps in the ongoing process; therefore, the content of his latest letter, which is expected to be read today in Diyarbakır, is greatly anticipated.

According to Turkish Economic and Social Studies Foundation (TESEV) Democratization Program Director Özge Genç, the letter is significant, as it shows that the peace process is going on despite worries, ups and downs and the slow pace of reforms. "Last year, Öcalan's speech, which was broadcast live, was a cornerstone for the continuation of the reconciliation process, for confidence building between the government and the Kurds, and it helped to transform the perceptions of Turkish society regarding peace, the PKK and the Kurdish movement. This year's speech will have a similar impact, I believe," Genç said.

She assumes that in this year's letter, Öcalan will back the process and send messages and references to the Kurds and Turks separately. "Coupled with the latest decision by the European Court of Human Rights (ECtHR), Öcalan's second Nevruz speech might lead to further relaxation of his situation, and he might be given the opportunity to talk to journalists, civil society, et cetera," she added.

Yunus Akbaba, a researcher at the Foundation for Political, Economic, and Social Research (SETA), anticipates that Öcalan's message will principally address three actors: the Kurdish political movement (Peace and Democracy Party (BDP), People's Democracy Party (HDP), PKK) and their democratic allies, the government, and international actors. Akbaba said: "In this regard, Öcalan will try to meet the expectations of the PKK with carefully considered words that will not jeopardize the process. Consistent with this argument, Öcalan will ask the Kurdish movement to continue their political struggle on their own for practical gains. To fend off critics, he will emphasize the importance of following their own agenda rather than that of the Justice and Development Party (AK Party). He will also thank the Kurdish political movement for their efforts in the reconciliation process and will ask them to concentrate on enlarging the subjects and the parties in the negotiations within the context of the democratization of the country. Stated differently, he will ask the Parliament and nongovernmental organizations (NGOs) to facilitate dialogue among the political parties in the reform process, along with reassuring the country. In a nutshell, Öcalan will praise the significance of politics, externalizing violence for the PKK."

The reconciliation process was welcomed across Turkey, and the government introduced several reforms in this context. In September last year, Prime Minister Recep Tayyip Erdoğan announced a "democratization package" that introduced broader political rights, education in the native tongue and tougher penalties for hate speech. Reforms included giving permission to private schools to provide Kurdish-language education, abolishing the patriotic student oath in elementary schools, ending penalties for the use of certain letters, such as "q," "w" and "x," which are used in the Kurdish language, and restoring town and country names.

Experts believe that the government will continue with reforms and take the necessary steps for the reconciliation process after the election. Moreover, experts also assume that Öcalan's letter will refer to further reforms.

Akbaba said that Öcalan would ask in his letter for the government to be clearer and bolder in its reform plans, while setting the legal status of the negotiations. "He will ask the government to be committed to the process and undertake the necessary judicial and democratic reforms, including the use of the Kurdish language as a native tongue in education, elimination of Turkey's infamous counter-terrorism law and introduction of a decentralized local government structure.

Moreover, he will emphasize the importance of taking measures for the reintegration and rehabilitation of PKK members, as was planned for the third and final step of the process. Öcalan will also give a message to oppose any move against democratic politics and the reconciliation process, most probably without mentioning the Gülen Movement."

On the other hand, Genç drew attention to the fact that the Kurdish public has further expectations from the government to maintain their beliefs in the resolution process. "The Kurdish Communities Union [KCK] trials and the issue of activists and politicians in prisons because of their political, civil society and journalism activities should be a priority. ... Their release is the utmost expectation. And it will definitely have a positive impact on the psychology of the Kurdish population and politics. There are also those who have already received sentences, and for these people, an amnesty or a reduction in sentences should be considered, Genç said.

Coşkun also shared similar sentiments: "The Turkish and Kurdish sides have passed pretty good tests over the last year. There were some actions that aimed to sabotage the process, but the sides managed to continue the process despite hindrances. After this stage the government should take the initiative and start to implement new regulations to boost the process, such as bringing PKK members back from the mountains and maintaining social peace," Coşkun added.

In line with this expectation, Turkey's ruling AK Party officials signaled that the administration intends to embark on an audacious reform program to promote democratization and facilitate an ongoing reconciliation process. Political sources in Ankara confirm that the government has been working on a comprehensive reform package that will meet expectations to boost the reconciliation process. Sources claim that the administration will announce its reform agenda after the local elections on March 30.

Prime Minister Erdoğan's speech in the southeastern city of Batman can be considered as one of the signals that the AK Party will continue the reform process after the election. In his speech, Erdoğan reiterated his commitment to completing the Kurdish reconciliation process initiated by his party. "The reconciliation process was welcomed across Turkey, and we, the AK Party government, are on it; we will proceed at all costs," said Prime Mİnister Erdoğan.