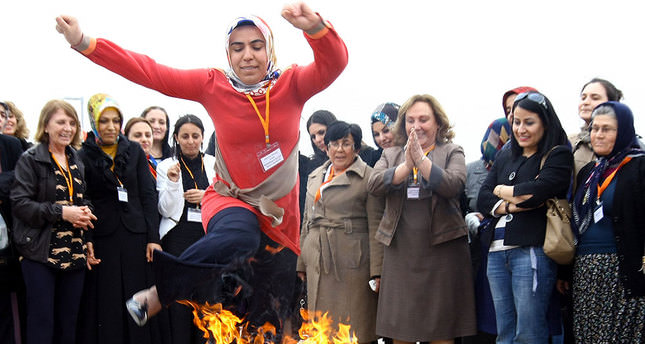 ANKARA – As a precursor to spring, this year's Nevruz is opening a new chapter in Turkey. Nearly two billion people from different ethnicities will sing in their own language, including Turkish, Kurdish, Arabic and Laz. While Turkey has long been occupied with violence, Nevruz celebrations emphasize peace and brotherhood after the initiation of the reconciliation process between Ankara and Kurds. The last day of Nevruz will be celebrated in Diyarbakır today.

Nongovernmental organizations and political parties in Diyarbakır will support the reconciliation process started by Turkish government and emphasize that "any move to end the process would fail."

Banners saying "Happy Nevruz" in Turkish and Kurdish are hung everywhere throughout the city. The police force, intelligence bodies and the Kurdish- based Peace and Democracy Party (BDP) will work in cooperation to prevent any provocation during the Nevruz celebration. "The reconciliation process started 16 months ago. No matter what happens, the process should continue," AK Party's Diyarbakır mayor candidate Galip Ensarioğlu said. He also said that neither the Republican People's Party (CHP) nor the Nationalist Movement Party (MHP) are capable of carrying out reconciliation process.

Ekrem Güzel, a taxi driver, said, "I am no longer afraid to tell people that I am a Kurd. The reconciliation process allowed us breathe a sigh of relief.

There is no more violence or conflict during the Nevruz celebrations." Teens, the once stone-throwing children living in conflict, now look to the future with confidence. Şehmuz Kartal, a university student, said, "Guns are not mediums of seeking rights. They should be completely deactivated." Helin Yılmaz, a teacher working at a state school in Diyarbakır for nearly six months, said, "Police, citizens, soldiers, villagers, students and teachers in Diyarbakır do not give dirty looks to each other anymore. The division of state paranoia in the city has ended." Praising Turkish Prime Minister Recep Tayyip Erdoğan, retiree Abdurrahman Alpboğa said, "The prime minister should be supported in this critical reconciliation process."