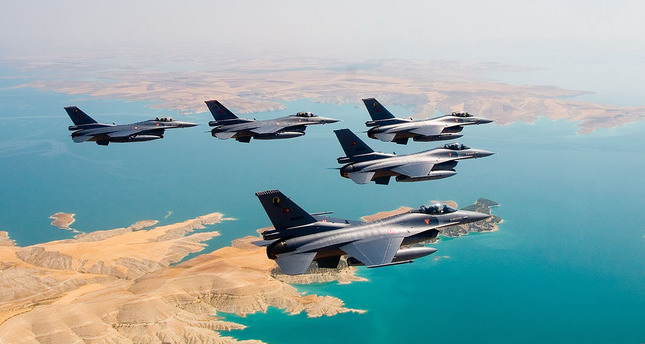 by daily sabah Mar 24, 2014 12:00 am
ISTANBUL — Turkish Prime Minister Recep Tayyip Erdoğan confirmed on Sunday that the Turkish air forces has shot down a Syrian jet after it violated Turkey's airspace.

"Our Syrian border has been breached," said Erdoğan. "Our F-16s took off and hit this plane. Why? Because if you violate our airspace, we will strike hard."

Speaking during an AK Party rally in Kocaeli, Erdoğan continued, saying, "I extend my gratitude to the Turkish Air Force and its pilots."

Turkey changed its rules on border engagement on June 22, 2013 when an F-4 aircraft was shot down over the southern Mediterranean.

On June 26, 2013, Erdoğan announced that Turkeys' rules of engagement had changed. In accordance with the new rules of engagement, all Syrian military units approaching the border will be declared as a threat and military target. According to the new rules, even if they do not actually cross the border, Syrian military units could still be subject to an attack by Turkey, deeming them a security threat and hostile movement.

On Sunday, Governor of Hatay Mehmet Celalettin Lekesiz said, "According to the information released 20 minutes ago, a Syrian aircraft was shot down in the northern Syrian district of Kasab."

According to the statement, the F-16 aircraft was on patrol along the Turkey-Syria border. "One of our F-16 aircrafts on Combat Air Patrol was violated for approximately 20 seconds by a Syrian SA-5 air defense system by keeping its radar locked," added the statement.

The Turkish Coast Guard Command acts as a police station with four boats along the Turkey-Syria sea border.

On Saturday, opposition forces seized the northwestern town of Kasab in Syria following a series of clashes with regime forces, officials said.

The clashes killed two members of the opposition and 45 members of the regime's forces, while at least 11 others were injured.
Some of the injured were taken to hospitals for treatment in the Syrian bordering city of Hatay in Turkey.

The Syrian Observatory for Human Rights said, "Turkish air defenses targeted a Syrian fighter bomber as it struck areas of the northern province of Latakia. The plane caught fire and crashed in Syrian territory."

The Observatory said government forces and rebels on the ground were battling for control of a border post with Turkey in Latakia province.

"Fighters of al-Nusra Front and other groups have overrun the crossing point and driven out government forces" and their allies, said Observatory head Rami Abdel Rahman.

But fierce clashes continued around the crossing point and in the nearby town of Kasab, in a battle which erupted on Friday.
"Significant military reinforcements have been sent to the government forces," said the Britain-based Observatory, which relies on a network of activists and medical sources on the ground for its reports.

The Observatory said earlier that nearly 80 fighters on both sides have been killed in the Kasab battle.

Al Manar, the television station of Assad's Lebanese ally Hezbollah, said two rockets had been fired at the Syrian jet from Turkish territory.

Turkey was once a close ally of Syria. Now, thousands of Syrians have fled to Turkey to escape the violence in their country since clashes between anti-regime demonstrators and security forces first broke out three years ago.

The unnamed spokesman was quoted by Syrian state TV as saying the plane was downed Sunday in Syrian airspace as it was attacking rebels who have been on the offensive in the coastal province of Latakia. The spokesman said the pilot was ejected from the aircraft.