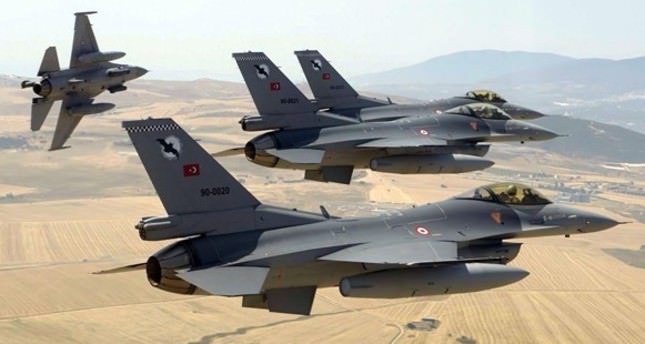 The Turkish military, which shot down a Syrian jet that violated Turkey's territory, remains on alert after the Assad regime continued its hostile stance by locking onto Turkish jets. Military jets are within striking distance of ISIL targets in case they move against Suleiman Shah's tomb protected by Turkish soldiers

ISTANBUL — After a Syrian jet was shot down by the Turkish Air Force and the Islamic State of Iraq and the Levant occupied an area surrounding Suleiman Shah's tomb, a Turkish enclave in Syrian territory, Turkey has taken the necessary measures to address the latest developments along its border

To counter possible threats from forces loyal to Syrian President Bashar al-Assad's regime or ISIL, a crisis desk has been set up and contingency plans prepared, taking all possible scenarios into account.

There are war planes on alert in Malatya, Merzifon and Diyarbakır and if necessary, ground forces also stand ready to be activated to provide close air support, including attack helicopters.

After Turkey shot down a Syrian Air Force fighter plane on Monday, which entered 1.2 kilometers into Turkish airspace and was warned to leave repeatedly, attention has turned to the tomb of Suleiman Shah, a Turkish enclave in Syria. Located within the region of Membeç and 40 kilometers away from the province of Suruç in Şanlıurfa, the tomb of Suleiman Shah has largely been spared in fighting between the Free Syrian Army (FSA), the ISIL, and Syrian military forces. Although no attacks have been launched around the area of Suleiman Shah's tomb previously, the ISIL released a video on the social network website YouTube on March 15 and asked Turkey to withdraw military forces in the area within three days.

ISIL has a heavy presence in the region, however despite reports that they control the entire region, it is apparent that they do not have a heavily organized military force and extensive mobility.

Mustafa Sıtkı Bilgin, a Middle East expert, spoke to Daily Sabah about recent developments in the area. Bilgin said, "Recently the international arena is becoming tense because of events in Crimea and border problems between Syria and Turkey. If we look to Syria, this country became a center for international rivalries and conflicts. More than 1,500 armed groups are fighting each other and each group has international support. But recently Assad's army, with the help of Hezbollah, gained victories over Islamic groups in Yabroud, a region close to the Lebanese border."

He added that Turkey has recently faced numerous challenges, both from Assad's army and ISIL. "Turkey has legal international rights to prevent these threats according to the U.N. Charter," he said. "For this reason, Turkey targeted the Syrian War plane a few days ago. Turkey is also facing threats from ISIL, which asked [Turkish forces] to abandon the Suleiman Shah tomb.

According to international law, this site belongs to Turkey. Though the tomb, located in a small strip of land, remained within Syrian territory close to Turkey's borders, its possession and administration belong to Turkey. That is why Turkey is keeping a small military force in this area. "ISIL recently threatened Turkey, saying it would destroy the tomb. ISIL is always trying to provoke Turkey because this armed terrorist group is an international organization and it has connections with al-Qaeda. It conducts international operations in Iraq, Syria and elsewhere. It is alleged that this group is behind the terrorist attack that took place in Niğde, Turkey. Also the Turkish General Staff stated that it has taken all necessary measures against this terrorist group. These all indicate that the gravity of the threat from this group is serious. What Turkey does against these threats is entirely legal and Turkey has the right to eradicate these threats."

On Tuesday, the Turkish Armed Forces issued a statement after Syrian surface-to-air missiles locked on to five Turkish F-16 fighter aircraft near the Syrian border. "Six Turkish F-16 jets, patrolling along the Turkish-Syrian border, were deployed to the bordering Yayladağı district, as well as the border crossing at Cilvegözü in the southern province of Hatay, after four Syrian jets approached Turkish airspace. "The Syrian aircraft retreated however, and withdrew just 1.5 to 2.7 nautical miles before reaching the Turkish border. During the mission, Syrian ground-to-air missiles locked on five of the six F16 jets deployed by Turkey 12 times, for a total duration of 10 minutes, 53 seconds, while they were flying above Hatay."

Thus far, there has been no major fighting at Suleiman Shah's tomb since the beginning of the conflict. Turkish military forces have continued to stand guard by the tomb through two exchanges a month. There were previously 15 soldiers stationed at the tomb.
However, the number of military forces there has increased recently.

Meanwhile, Mihraç Ural (57), who lived in Latakia on the border of Hatay and was the alleged leader of the terrorist Acilciler organization, was reportedly killed when members of the Free Syrian Army (FSA) opened fire on him on Friday. Ural was apparently the mastermind behind a bomb attack in Reyhanlı, Hatay in which 52 people died. News reports indicate that Ural supported soldiers of the Assad regime in the battle between the FSA and regime soldiers for the seizure of Syria's Kasab border crossing. Allegations that Ural and his three companions were killed was well-received among members of the FSA.