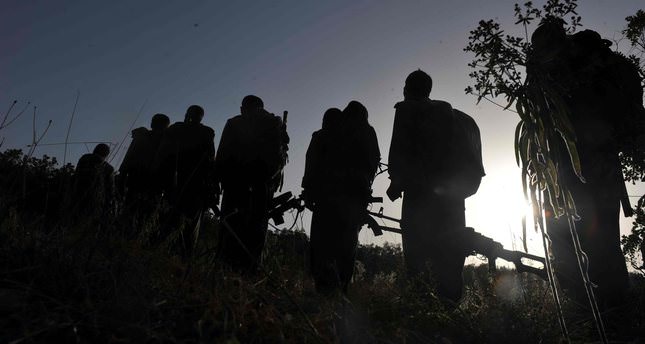 by daily sabah Mar 28, 2014 12:00 am
ANKARA — Abductions of local administrators and threats against villagers to force them to vote for particular candidates reveal the potential threat of the terrorist Kurdistan Workers' Party (PKK) in the upcoming local elections in Turkey. The Turkish Army announced that terror- ists from the PKK forced residents of a village in the southeastern province of Bingöl to vote "for a certain political party."

A statement published on the army's website said four armed PKK militants rounded up 15 villagers in a house. They threatened villagers and urged them to vote for a particular political party in the March 30 local elections. The name of the specific party was not cited in the statement.


Security forces arrived in the village upon a tip-off from one of the villagers. PKK militants kidnapped seven villagers and fled the area. The abducted villagers were later released in a mountainous area near the village. The PKK was also involved in a series of abductions last week in the southeast of Turkey.

In February, a village headman in the Çukurca district of the southeastern Turkish province of Hakkari was abducted by terrorists. He was released on March 25.

Another village chieftain from the Siirt province in the region was abducted on March 24 and released one day later. The PKK has led a campaign of terror in Turkey since 1984 in its fight for self-rule in the predominantly Kurdish southeastern part of Turkey. PKK attacks claimed more than 40,000 lives over years of fighting. It declared a de facto withdrawal from Turkish soil in 2012 after the government announced a series of reforms to restore the rights of the Kurdish community.

Still, with numbers estimated at 4,000 at most in 2013, the organization remains active as a dangerous armed force. In the latest incidents of violence in February, PKK militants hiding in northern Iraq opened fire on soldiers and workers at a construction site for a new security outpost to repel the PKK threat on the Turkish-Iraqi border. The Peace and Democracy Party (BDP), a dominant political force in several southeastern and eastern Turkish cities, is perceived as backing the PKK, though neither party has openly confirmed it. BDP party members have at times displayed rhetoric in support of the PKK and its jailed leader, Abdullah Öcalan.
Last Update: Mar 28, 2014 3:25 pm
RELATED TOPICS