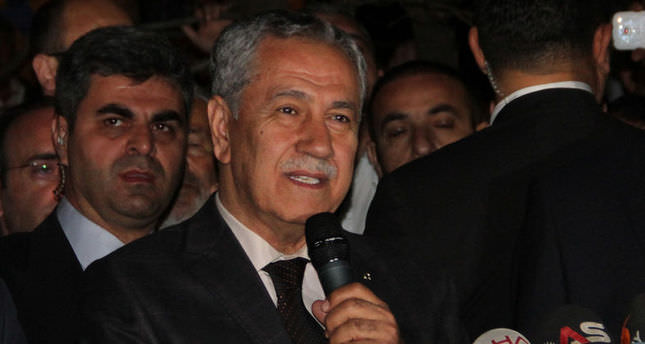 BURSA - Turkey's Deputy Prime Minister Bülent Arınç said those who eavesdropped on the security meeting of Turkey's high officials who were discussing threats against Turkish territory in Syria are betrayers, adding that even an enemy cannot commit such an ignominy.

Addressing a crowd in the western province of Bursa, Arınç emphasized that this ignominy is aimed at damaging Turkey's national security and putting the country at war with another country and dammed those who posted the 15-minute recording. Touching on Turkey's broadcast regulator RTUK's ban on the security-meeting leak, Arınç said that RTUK used a legal right to not publish media that could danger national security.

Uncovering the integrity of Turkey and Turkey's relations with other countries is a crime, said Arınç promising to find the spies whether they are from inside or outside.

The tomb of Suleyman Shah, in Turkish territory according to international law, is currently under threat due to an increase in fighting between the Syrian opposition and the Islamic State of Iraq and the Levant, or ISIL.

Protected by Turkish troops, the Suleyman Shah Tomb, Turkey's only exclave, and the surrounding area are located in Aleppo's Manbij district, approximately 30km from the Turkish border.