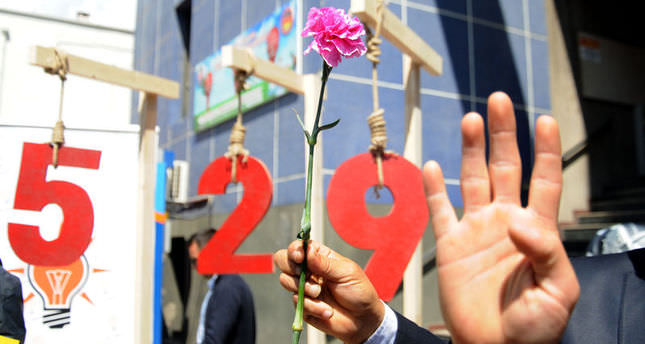 There is hope for the release of 529 supporters of the Muslim Brotherhood sentenced to death in Egypt. Egyptian Foreign Minister Nabil Fahmy said the new president might pardon the defendants

While reactions are rising against the decision for the death penalty for 529 people in Egypt, Egypt's Minister of Foreign Affairs Nabil Fahmy indicated that the new president to be elected might possibly forgive the 529 members of the Muslim Brotherhood.

The minister replied to a question about the death sentences in an interview with the French Le Figaro newspaper. He stated that the death penalty judgment is significant, yet the process is still continuing. "If the decision is finalized, 529 defendants may request to be judged again twice in terms of content and form. The upcoming president may grant an amnesty for them. This is just the beginning."

The Arab Freedom of Association Network called for the order, which they called the largest massive death sentence, to stay. The association called on Egypt's Grand Mufti to forgive the defendants by using his spiritual power. Organized through the Internet, the AVAAZ movement, which defends international human rights, launched a petition on their website for the mass executions to be stopped.

The London-based lawyers association published a notice on April 8. The association announced that the African Union has formerly made a resolution to delay the death sentence; however, this decision was ignored by the military regime in Egypt. The association also noted that the Egyptian government uses unprecedented violence.

There has been almost no global reaction to the death penalty decision made by the Egyptian courts. Although one of the darkest and most merciless massive executions will occur if 529 people are executed, the fact that reaction against the incident has not been remarkable, itself encourages the Egyptian junta for the executions.

As the world and especially Muslims did not react sufficiently, a protest campaign has started against the death penalties with the hashtag, "The World is Silent to the Massacre in Egypt." Under the hashtag, global public opinion and Muslims are criticized, as they have not sufficiently reacted against the decision. The hashtag was widely shared in a short time. In his statement to Daily Sabah, Istanbul University Professor Ali Arslan, the head of the Ancient Strategies Council Center (KASEM), stated that the expected execution of Mohamed Morsi's supporters is a contemporary decision of cruelty covered by a legal base.

Underlining that the executions do not have any rationale from the perspective of law and humanity, Arslan continued: "Defendants and lawyers are entitled to submit evidence, give statements and present a proper defense even in primitive courts. However, Egyptian demonstrators were not allowed to use any of these rights. Therefore, it is not rational to recognize this authority as a court, but merely the recognition of the prosecutor's verdict by the officers called upon as judges." Arslan indicated that the main problem of the military junta is their inability to control the Egyptian people, adding: "The rule of Mohamed Morsi lasted about one year. The main objective was to establish a new but similar authority. However, they were unable to realize this objective because people were courageous enough to pour into the street. Even though the Egyptian people were forced to stay at home and various organizations including the Muslim Brotherhood were shut down, the military junta failed. If demonstrators were killed on the street, it would create a great reaction. For this reason, they tried to find a different method of control. The military junta put the death sentences into force through the judicial officers of quickly established courts to show that everyone would be punished. In other words, they wanted to spread the perception that any demonstrator can be executed through so-called courts. They wanted to ensure their existence and calm the demonstrators through the fear of execution."

Pointing to what will happen if Egyptian army chief Field Marshal Abdel Fattah el-Sisi runs for the presidency in such a threatening atmosphere, Arslan stated: "If el-Sisi is elected by majority vote, he will establish his dominance over the army and police. Otherwise, his legitimacy will be put in doubt, and el-Sisi cannot sit at ease because they will fail in eliminating the polls. Furthermore, the anti-Muslim Brotherhood coalition will be dispensed with, and people pinning their hopes on el-Sisi will not support a leader with a short ruling life." Arslan also discussed the statement of the Ministry of Foreign Affairs that claimed that the new president might cancel the death sentences. He said: "If el-Sisi takes power, he will either cancel the death sentences of 529 people or limit its number in order to show his good leadership to both Egypt and the rest of the world. He will not only abandon his pro-coup identity, but also take a place in the minds of the Egyptian people. Otherwise, el-Sisi can only be recognized by spreading fear."

Finally, Arslan evaluated the silent attitude of Western countries against the death sentence: "Remaining silent against the executions is coherent with their strategy. This is because neither the U.S. nor the EU wants to accept that Egyptian people are as equal as their own citizens. The U.S. appears to support pro-coup groups to sustain its control over Egypt. The sensitivity of Israel on security helps the U.S. to support the military junta. The Ministry of Foreign Affairs gives the message that if the U.S. does not give sufficient support, they will leave el-Sisi alone. It is not possible for the EU to present a common attitude because of the lack of political cooperation. While France and the U.K. are on the side of the U.S., Germany does not greatly participate in this process. In light of the fact that Germany does not want to wear itself and the EU down, the death sentences do not make much sense for them."

In Egypt, the court sentenced 529 members of the Muslim Brotherhood to death, while 16 others were acquitted. The fact that the decision was made in just the second hearing caused huge reactions in the world. Only 153 of the defendants who have been sentenced to death are in custody, while the others are being sought. The decision is open to appeal; however, there seems little possibility that such a quick decision will be appealed. In Egypt, a popular revolution and then a military coup were experienced under the influence of the Arab Spring.