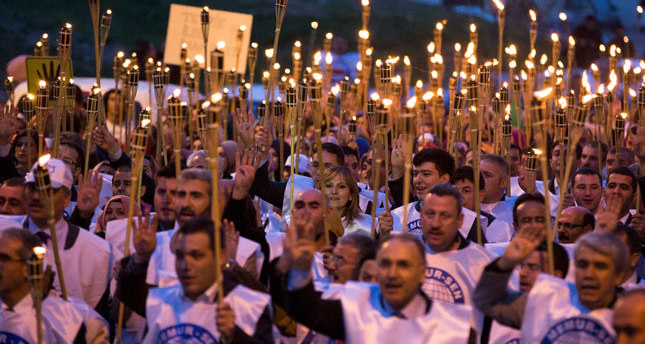 by AA
Apr 11, 2014 12:00 am
ANKARA — Thousands gathered across the Turkish capital Ankara on Thursday to voice their condemnation of the mass death sentences handed down by an Egyptian court against hundreds of Muslim Brotherhood members.

A number of unions and non-governmental organisations held rallies around the city in front of Ankara's United Nations (UN) building and the Egyptian Embassy in Ankara.

The demonstrators put up symbolic scaffolds in the main squares and carried placards reading "Humanity is executed" and "Pro-coup will be defeated." Messages were also read out decrying the death sentences and maintaining Turkey's clear and firm stance against the coup regime that removed Egyptian President Mohhamed Morsi.