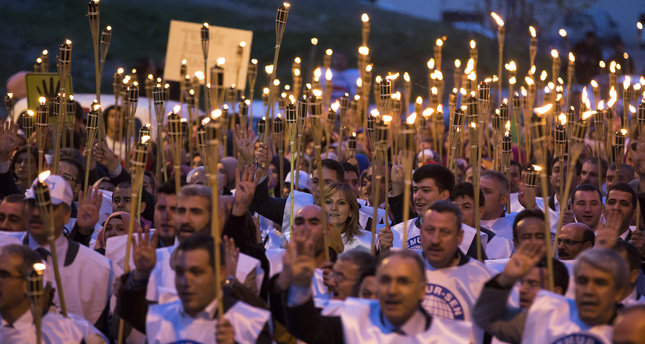 Thousands of demonstrators yesterday once again condemned the death sentences meted out against 529 Muslim Brotherhood members, supporting the government's criticism of Egyptian coup leaders and the injustice perpetrated by courts

Protests organized by several nongovernmental organizations (NGOs) started late Thursday in front of the Hagia Sophia museum in Istanbul's historic Sultanahmet district. Hundreds braving rain performed evening prayers and recited verses from the Quran. Holding banners reading, "Let me be the 530th," protesters prayed for ousted President Morsi and condemned the coup regime. Some Egyptian Muslim Brotherhood members were among the crowd of protesters. Demonstrators branded the court ruling as unfair and slammed the international community's silence over the death sentences. In Ankara, a group holding torches marched to the offices of the United Nations in the Turkish capital, calling on the body "to wake up and raise its voice" against the sentences. Protesters set fire to a mock gallows in front of the building before dispersing without incident. Similar protests were held across the country the next morning, culminating in larger rallies after Friday prayers.

In Istanbul, a large crowd gathered outside Fatih Mosque and marched in a rally jointly organized by several NGOs. Protesters making Rabaa signs in solidarity with Muslim Brotherhood supporters waved banners with messages against the death sentences. Earlier this week, nationwide protests were held against the verdict.

Members of ruling Justice and Development Party (AK Party) youth branches rallied and collected signatures for a petition to Egypt's Grand Mufti, the country's top religious figure, urging him to stop the executions. The mufti has the authority to issue an opinion, but the court will hand down the final verdict, likely on April 28, the date set for the next hearing.

Mehmet Görmez, the head of Turkey's staterun Directorate of Religious Affairs, the country's top Islamic body, sent a letter to Mohamed Ahmed al-Tayeb, the grand imam of al-Azhar, a top religious university and institution in Sunni Islam in Egypt and the top Islamic body there.

Görmez urged al-Tayeb to intervene to stop the executions. A criminal court in the Egyptian province of Minya in March sentenced 529 supporters of ousted President Morsi to death and cleared 16 others on charges of inciting violence and attacking police. The trial involved more than 1,200 Morsi supporters and Muslim Brotherhood members who face a range of charges stemming from violent riots last August against the coup regime. Defendants were accused of involvement in an attack against a police station in Minya, during which a policeman was killed. The Turkish government condemned the court's ruling. Prime Minister Recep Tayyip Erdoğan criticized the European Union for remaining silent on the mass death sentence. Foreign Minister Ahmet Davutoğlu said, "This decision shows the antidemocratic and illegal approaches of the current Egyptian military regime following the coup." Davutoğlu emphasized that Turkey would always side with the Egyptian people and underlined that the death sentences showed the Egyptian regime was "far from democratic."