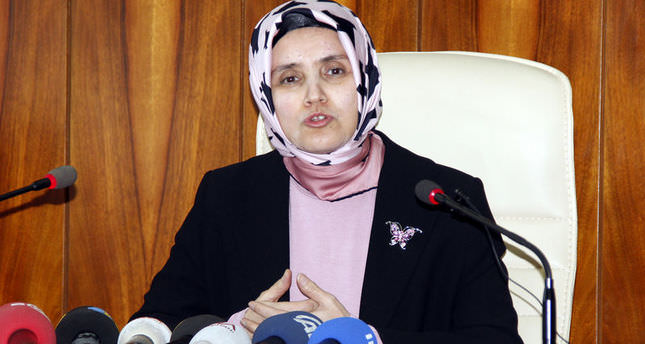 The President of Dicle University Ayşegül Jale Saraç, who made headlines when she became the first university president to wear the hijab, is facing an investigation over her alleged ties to the controversial Gülen Movement

DİYARBAKIR — The President of Dicle University Ayşegül Jale Saraç, who made headlines when she became the first university president to wear the hijab, is facing an investigation over her alleged ties to the controversial Gülen Movement. Specifically, Saraç is accused of extorting money from academics for the movement.

Professor Saraç, who was appointed as president of the university in the southeastern province of Diyarbakır in 2008, first wore hijab last week. Her decision to wear a hijab came after an academic from the university claimed Saraç expelled him from the university over his stance on the controversial cleric Fethullah Gülen. Media reports claimed Saraç did so to play on sympathies of the conservative public in the event she is subject to an investigation.

Cuma İçten, a Diyarbakır lawmaker for the ruling AK Party, accused Saraç and the university administration of extorting money from lecturers on behalf of the Gülen Movement. İçten called the administrators to resign. Following this development, Turkey's Council of Higher Education (YÖK), a state-run body which oversees universities, launched an investigation into Saraç.

İçten has claimed that the state-run university was turned into an institution effectively controlled by Gülenists. "After Saraç's appointment, a large number of academics from other cities were transferred to the university. Those academics, in exchange of their assignment, were forced to donate a percentage of their salaries to the Gülen Movement. It was extortion in a way. Many lecturers who did not bow to administration's demands were suspended," İçten said at a recent press conference.

Ahmet İnan, a theology lecturer claimed last week that he was not promoted and expelled from the university after he criticized Gülen.

İnan, an associate professor, sought permanent employment instead of temporary status after he was promoted to associate professor in 2009. Saraç, despite vacant positions, denied permanent employment for İnan, who lodged a complaint to a state body overseeing universities. İnan claimed the university president launched an investigation in retaliation. As the investigation was being conducted, İnan gave an interview to a local TV station and criticized Gülen. One day after the interview aired, the university immediately concluded the investigation and issued a disciplinary sentence. İnan brought the matter to court, which annulled the decision. He faced additional investigations after he won the lawsuit and was eventually expelled from the university. He filed another lawsuit and the court ruled his expulsion was unfair and ordered the university to pay compensation.

İnan claimed Dicle University had "a Gülenist network" of professors who blacklisted him and other academics.

Saraç denied these allegations in a written statement and claimed she had no ties to the movement. "The university administration did not support any particular group and will not allow any 'parallel structure,'" she said, referring to the term attributed to Gülenist infiltrators within the state and government agencies.

Saraç is already under investigation by YÖK over corruption charges and the promotion of unqualified lecturers. A professor of medicine, Saraç competed in the 2007 parliamentary elections for the post of parliament deputy from the AK Party but lost the elections. The Gülen Movement is known for running a "himmet" scheme to raise funds. Himmet is the technical name used for the fundraising meetings organized by Gülenists.

Through those meetings, the movement collects money from businesspeople, civil servants and others but how the collected funds are spent is never explained. The movement, which waged an anti-government campaign last year and is known for conducting operations to discredit and eventually topple the government, was behind a series of scandals involving illegal surveillance by Gülenist police officers and prosecutors.
Last Update: Apr 15, 2014 1:34 am
RELATED TOPICS