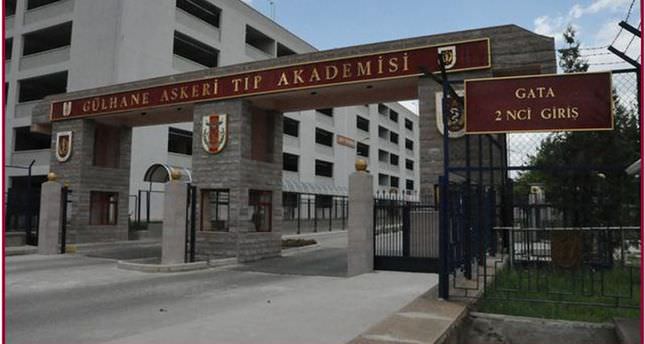 by Daily Sabah Apr 14, 2014 12:00 am
ISTANBUL — An active-duty military officer claims that the Gülen Movement has infiltrated the Gülhane Military Medical Academy (GATA), Turkey's most prominent military academy, for over two decades.

A high-ranking officer who did not disclose his name sent letters to media outlets about Gülenists and how they infiltrated the GATA beginning in 1988.

The officer said he first contacted the Gülen Movement in 1987 and remained loyal to the movement until 2010. He said he was introduced to Fethullah Gülen in 1996 by a fellow military officer when they attended a dinner together with other officers from the GATA. He said that the officers were so devout to Gülen that "they raced to eat the leftovers Gülen left in his plate and they deemed them sacred after the dinner." The officer said in the letter that sons of Gülen's followers who "had the opportunity to be admitted to universities requiring higher grades" were compelled to attend the GATA. He claimed there were currently more Gülenists in the GATA than those attending the private universities operated by the Gülen Movement. The letter cited that Health Directorate of the Turkish Armed Forces which oversees military medical schools served as a "headquarter of Gülenists within the army." He said a high-ranking military officer loyal to Gülenists was coordinating the movement's infiltration into the army.

The officer said 150 lecturers out of 500 in GATA were loyal to Gülen. The Gülen Movement is an influential group that evolved from a religious congregation into a network of followers which are now targeting the government through a targeted propaganda campaign. Following the Dec. 17 operation, when Gülenists in the police and judiciary launched a targeted campaign against Prime Minister Recep Tayyip Erdoğan and his allies, the government moved to purge Gülenists who had infiltrated state and government agencies. It is suspected that the police force and judiciary are among the most thoroughly infiltrated bodies in the Turkish government.

Gülenists' attempt to infiltrate the army were revealed earlier this year when former Gülenists came forward and spoke of the movement's plans to leak questions to military school exams to its young followers preparing for exams.
RELATED TOPICS