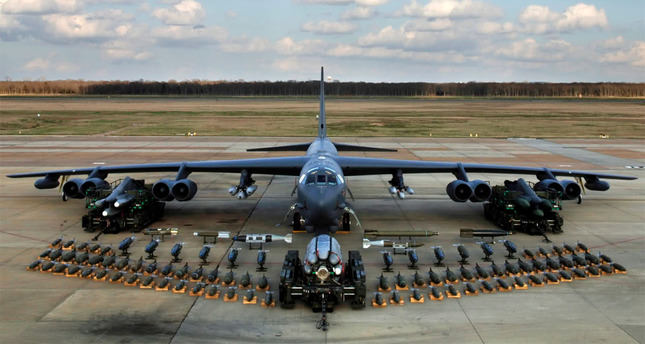 ANKARA — Due to a reduction in overseas military operations and austerity measures in the West, Turkey came in this year at 14th in military spending worldwide, with a total defense expenditure of $19.1 billion

The Stockholm International Peace Research Institute (SIPRI) recently released information on military expenditures by individual states in 2013 which showed that military spending fell by 1.9 percent in real terms last year, to reach $1.747 trillion (TL 3.71 trillion). This was the second consecutive year in which spending fell and the rate of decrease was higher than the 0.4 percent fall in 2012. This stemmed primarily from a reduction in overseas military operations and austerity measures in the West.

With Canada's army, air force and navy struggling to cope with a $2 billion budget cut and bracing for more reductions in its federal budget, Turkey has replaced Canada to become the world's 14th top military spender in 2013, according to figures released on April 14 by SIPRI. The report said Turkey's military expenditure totaled $19.1 billion last year, a share of 2.3 percent of GDP, which saw it rise from 16th place the previous year. Between 2004 and 2013, Turkey's military spending increased by 13 percent in real terms. According to military analysts, Turkey has been forced to contend with new security concerns, particularly those stemming from the ongoing civil war in Syria.

Saudi Arabia also climbed from seventh to fourth place, having increased its military spending by 14 percent in 2013. Among the largest spenders, Saudi Arabia has by far the highest military burden, that is, military spending as a share of GDP. At 9.3 percent, it is also the second-highest (after Oman) for any country for which SIPRI has recent data. Along with Saudi Arabia's rise, the U.K. has fallen out of the top 5 spenders, probably for the first time since World War II. Military spending by the U.S. declined by 7.8 percent in real terms in 2013, to $640 billion. A part of the fall ($20 billion of the $44 billion nominal fall) can be attributed to the reduction in outlays for Overseas Contingency Operations (OCO), that is, overseas military operations, chiefly in Afghanistan and Iraq.

China's spending increased by 7.4 percent in real terms. While China has been behaving more assertively in recent years in territorial disputes with Japan in the East China Sea, and with the Philippines and Vietnam making claims to the South China Sea, these heightened tensions do not seem to have changed the trend in Chinese military spending.

Russia's spending increased by 4.8 percent in real terms and its military burden exceeded that of the U.S. for the first time since 2003. Russia's spending has risen as it continues to implement the State Armaments Plan for 2011–2020, under which it plans to spend 20.7 trillion rubles (TL 1.22 trillion) on new and upgraded armaments. The goal is to replace 70 percent of equipment with "modern" weapons by 2020. While South Korea and Turkey also increased their spending, military spending fell in France, the U.K., Italy, Brazil, Australia and Canada, as well as the U.S. Spending by Germany, Japan and India was essentially unchanged. For much of the 2000s, military spending increased fairly rapidly in Brazil and India (as it did in fellow "BRIC" countries Russia and China). However, since 2009 these increases have stopped or have been slightly reversed, as economic growth has weakened and spending on other sectors has taken priority.

While spending in North America and Western and Central Europe fell in 2013, it increased in all other regions. The largest increase was in Africa, by 8.3 percent. In Western and Central Europe, a majority of countries continued to cut military spending as austerity policies were maintained in most of the region. The falls in the region since the beginning of the financial and economic crisis in 2008 are no longer confined to Central Europe and the "crisis" countries of Western Europe. France, despite continuing weak economic growth, has largely maintained its military spending during the global economic crisis and spending in 2013 was just 4 percent lower than in 2008.

In Central America and the Caribbean, military spending continued to grow rapidly, in the wake of continuing drug cartel-related violence. Africa had the largest relative rise in military spending in 2013 of any region, by 8.3 percent, to reach $44.9 billion. Algeria continued the breakneck pace of growth in its military spending, with an 8.8 percent increase in 2013, to reach $10.4 billion, the first time an African country has spent more than $10 billion on its military.
Military expenditures in Asia and Oceania increased by 3.6 percent in 2013, to reach $407 billion. Most of the increase in the region in 2013 was due to a 7.4 percent increase by China. While military spending fell in Oceania (chiefly Australia), it increased in Central and South Asia and in East Asia, although the latter increase was almost entirely due to China.

Military expenditure in the Middle East increased by 4 percent in real terms in 2013 and 56 percent between 2004 and 2013, to reach an estimated $150 billion. While figures for military expenditures in the Middle East have traditionally been very unreliable and inconsistent, the lack of data has worsened recently. In 2013, there was no available data for Iran, Qatar, Syria, the United Arab Emirates and Yemen. The largest increases in military spending were in Iraq (27 percent) and Bahrain (26 percent). It is likely that increases in defense spending in Bahrain are related to recent purchases of arms used to suppress domestic unrest as well as troubled relations with neighboring Iran. In Iraq, recent increases are aimed at building the capacity and armaments of the Iraqi armed forces, in order to improve the security of citizens, access to services and protection of oil production and exports.