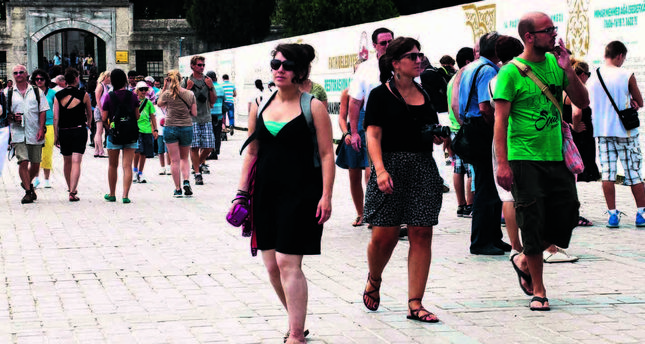 ISTANBUL — Turkish police conducted a survey of 419 tourists for a report entitled "Safety Perception Among Tourists." Tourists were interviewed at Istanbul's Atatürk Airport for the report, and 89 percent of those interviewed said they felt safe in the city of 14 million people.

The survey shows that tourists perceived fraud, theft or other money-related crimes as the most immediate threats in Istanbul, but nine out of 10 tourists said they would visit Istanbul again in the future.

The interviewed tourists praised the hospitality and benevolence of Turkish people but complained about the lack of people speaking English.

The report concludes that the level of security in the city would not cause a decline in the projected number of tourists in the coming years.
The city, which topped the list of the "Top 25 Destinations" on the world's biggest travel website, TripAdvisor, hosted 2,198,000 tourists from January to March 2014. No recent statistics are available for the crime rate or crimes targeting tourists for the city, but 2012 statistics compiled by researchers from various universities indicate over 650,000 crimes were committed in the city.

Tourists are subject to minor thefts and scams in the city, such as unfair billing at restaurants and other places, as well as taxi drivers ripping off foreign customers by charging more than they should for travel, but those often go unreported. More serious crimes like homicide are not common. The last known murder targeting a tourist was in 2013. Sarai Sierra, an American woman traveling alone, was killed in a secluded part of Istanbul during a rape and theft attempt.

The Gezi Park protests of last year had raised concerns that it would deal a blow to the number of tourists visiting the city, but the violent riots concentrated in Taksim Square and its vicinity, did not deter tourists who prefer the "historic peninsula" of the city where landmarks such as the Blue Mosque and Hagia Sophia are located, far from the square. Bag-snatching, once prevalent in the city and one of the major threats for tourists and locals, significantly decreased in recent years due to the increased presence of plainclothes police officers in crowded areas.
RELATED TOPICS