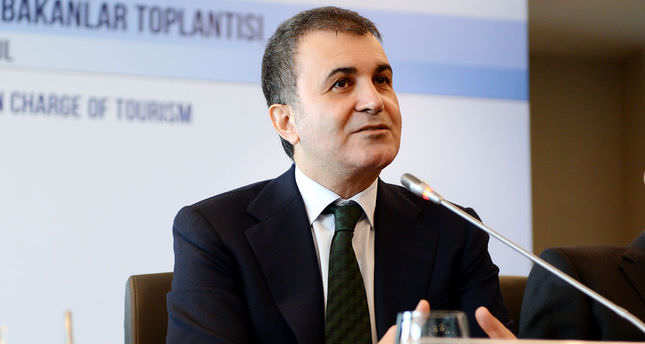 by Burcu Çalık
Apr 17, 2014 12:00 am
ISTANBUL — U.S. citizen Kyoko Schmidt has returned two fourth-century amphoras which her husband stole from Turkey in 1965. The amphoras arrived in Turkey last week after Schmidt delivered them to the Turkish embassy in Washington, which handed them over to the Museum of Anatolian Civilizations in the Turkish capital Ankara.

Minister of Culture and Tourism Ömer Çelik said they appreciated Mrs. Schmidt's decision to return the amphoras. "The artifacts of civilizations which lived in Turkey will be kept here in Turkey, again in good hands."

Çelik said the amphoras were extracted from a shipwreck off the coast of Bodrum, a town in the southwest of Turkey in the 1960s. Initial examination by experts shows that the amphoras resembled Mende amphoras, named after an ancient Greek city located in the northern Greece.

For decades, Turkey has been exerting efforts to retrieve artifacts and other items of historical value from museums and individuals abroad. The government's biggest success story was the return of Weary Heracles, a Roman statue whose bottom half was in Turkey. In 2011, the remaining sections of the statue were returned to Turkey by the Museum of Fine Arts in Boston.

In February, Rick O'Ryan, another U.S. national, returned two amphoras smuggled out of Turkey in the 1950s by his father, a U.S. official who had been posted in Turkey at the time.

An unknown number of historical artifacts were looted from the country's archeological sites over the years but Turkey's efforts to retrieve the antiquities proved futile as museums in Western countries refused to return them. In the past decade, Turkey stepped up efforts for their return by presenting evidence that they were illegally excavated and smuggled out of Turkey.