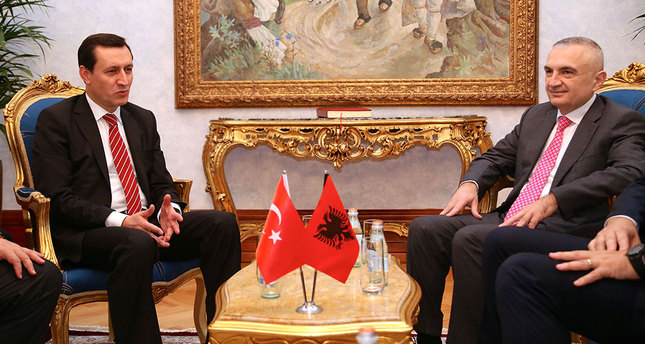 Işler was welcomed by Albania's parliament speaker Ilir Meta in the presence of Turkey's ambassador to Albania, Hidayet Bayraktar; the president of Turkish International Cooperation and Development Agency (TIKA) Serdar Cam; a delegation of ministers and of Turkish Parliament and leaders of several political parties in Albania.

The meeting on Saturday was closed to the media.

The minister held a separate meeting with Albania's PM Edi Rama which was also closed to journalists.

Later in the day, Işler visited the Alternative Future Foundation (ALSAR), an association that helps orphans in Albania whose building was restored by TIKA and met the foundation's director, Mehdi Gurra.

"This foundation finances the education of about 2,000 orphans. That figure will increase in future," the Turkish minister said after giving gifts to the children.

Işler also visited the Ethem Bey mosque in the Albanian capital which dates from the period of the Ottoman Empire, and announced that TIKA will restore it.

"This is the only mosque that dates from the Ottomans' period. Damage is noticed at the mosque. That is why TIKA constantly run projects in this country. In July this year it will start restoration of this object," Işler said.

During his visit to Albania, Işler also attended the inauguration ceremony of the historical Murad Bey Mosque in Kruja city which was restored by Turkey's TIKA.

He noted that the mosque, which dates back to 1534, had never been reconditioned until 1837.

"As long as such structures remain standing, our friendship and brotherhood will last forever, he said.