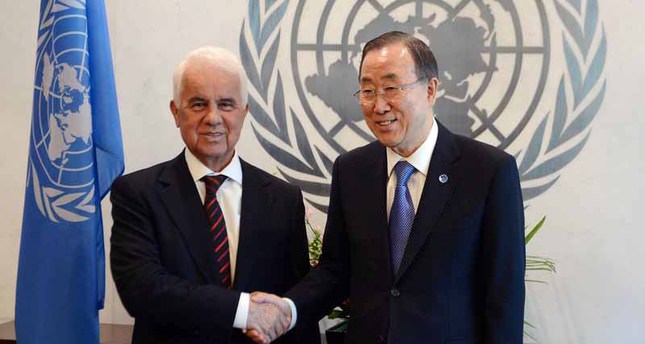 by AA Apr 22, 2014 12:00 am
ANKARA — President of the Turkish Republic of Northern Cyprus Derviş Eroğlu has said that peace talks with "sacrifices on the Turkish side only" would only impede an agreement on the Cyprus issue.

Eroğlu was speaking after a meeting with UN General-Secretary Ban Ki-moon in New York on Monday to discuss latest developments in UN-sponsored negotiations over the island's future.

The Turkish-Cypriot leader said the Secretary General had indicated that a settlement be reached within the shortest period of time.

Eroğlu added: "Both sides have wasted too much time blaming each other for 46 years; however, the Turkish Cypriots have endured more harm."

Stating that the Cypriot Turkish community wants to be a part of the international community in the 21st century Eroğlu said: "It's not fair for people to be degraded who courageously expressed their will ten years ago.

"If a comprehensive solution is one of the ways to correct this injustice we are ready for it. A continuation of discrimination, embargo, isolation and ignoring our people while negotiations continue is unacceptable. We are sincerely ready for a settlement."

The island of Cyprus has remained divided into Greek and Turkish zones since a Greek Cypriot coup was followed by a Turkish peace mission to aid Turkish Cypriots in the north in 1974.