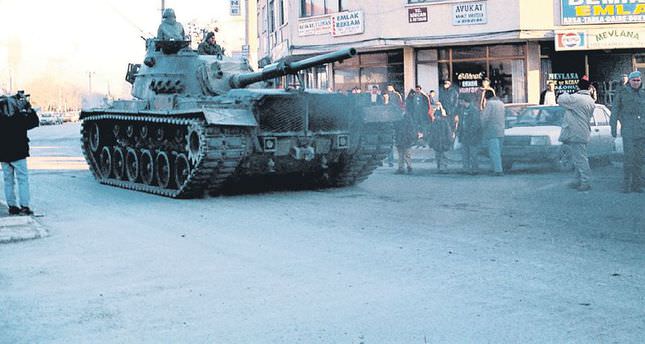 by Aliye Çetinkaya Apr 23, 2014 12:00 am
ISTANBUL — Turkish officials are nearing the end in an investigation into the civilian figures of the so-called "postmodern coup" of 1999.

As part of a criminal investigation by the Chief Prosecutor's Office in Ankara, the Financial Crimes Investigation Board (MASAK) began a probe into the civilian leg of the coup about two years ago. MASAK's findings will be delivered to the prosecutor's office by the end of April.

The board's financial crime experts investigated the incomes and expenses of 500 people who were involved in or supported the coup.

Businesspeople, journalists and labor union leaders are among those whose earnings were investigated.

The investigation found an unprecedented rise in the wealth of some people on the list presented by the prosecutor's office. Investigators examined whether the accumulation of wealth is connected to the coup. Some coup leaders and civilians are also accused of speculation in stock markets between 1997 and 2002.

The Feb. 28 coup against the so-called Islamist government of the Welfare Party (RP) took place in 1997, two years after the RP came to power. The rift between the government and the army, which saw itself as the defender of secularism, widened and evolved into an all-out conflict between so-called secular circles and the government. The campaign against the RP also affected conservative citizens who were subjected to blacklisting practices, expulsions and attempts to tarnish their image by several media outlets.

After coming to power in 2002, the AK Party, whose founders and most members are former RP officials, launched an investigation into the Feb. 28 coup through a parliamentary subcommittee in 2012. A wave of arrests followed the launch of the probe, though civilian involvement in the coup had not yet been thoroughly investigated.
RELATED TOPICS